British Pound and Euro Advance Against the US Dollar

The British Pound and Euro advanced against the US Dollar as Monday’s trading session came to a conclusion. Their strength could be attributed to a slew of better-than-expected European economic data earlier in the day. Markit German Composite PMI showed that the country saw growth for the first time since the third quarter of last year. This is as similar rosy readings from Markit UK Composite PMI turned positive.

Tensions between the two nations still remain elevated and do pose a threat for market mood. Meanwhile at the Federal Reserve, usage at the central bank’s overnight repo agreement amounted to $76.9b of securities. That was the highest in just over one month, though short of the $120b ceiling. These open market operations offer near-term liquidity for lenders seeking additional capital in exchange for collateral and interest.

Tuesday’s Asia Pacific session is lacking notable economic event risk, placing the focus for forex on swings in sentiment. Regional bourses may follow Wall Street higher and could offer a boost to the pro-risk Australian Dollar as the Japanese Yen weakens. December Philippine inflation data will cross the wires at 1:00 GMT, though USD/PHP arguably remains more focused on risk trends.

Taking a closer look at the GBP/USD daily chart, the rise on Monday followed what appears to have been a top under resistance at 1.3304. It is unclear at this point yet if there is further strength to be had from GBP. Resuming declines entails taking out near-term rising support from November. Though signals from IG Client Sentiment are arguing for the case to the upside at the time of this writing. 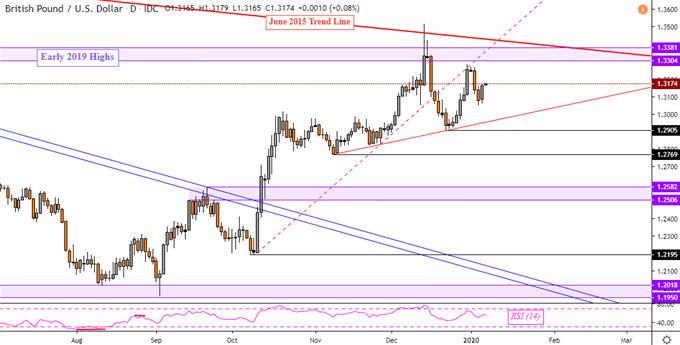