US Dollar, Japanese Yen and Crude Oil Prices May Rally as Week Begins

The haven-linked US Dollar and anti-risk Japanese Yen along with sentiment-oriented crude oil prices may rise at the onset of the new trading week. This potential coordinated move could reflect an extension of the “risk-off” tone that picked up pace towards the end of last week as the S&P 500 fell 0.71% on Friday. Investor mood has been leaning pessimistic amid rising geopolitical concerns between the United States and Iran.

It further escalated after the former conducted a successful airstrike in Baghdad last week, taking out a prominent Iranian military general. The latter has since vowed “severe retaliation” as US President Donald Trump said that the country is willing to take any action “that is necessary”. Now just hours before market open, there have been confirmed rocket strikes near the U.S. Embassy in Baghdad’s international zone.

On top of this, Iran announced that it will no longer abide by terms set out by the 2015 nuclear agreement. This is a move that could be met with further economically-damaging sanctions by the White House. Meanwhile, Iraq’s Parliament approved a resolution calling on the government to expel around 5k U.S. troops from the country.

With a rising presence of US-based military aircraft over Baghdad and Trump threatening to quickly and fully strike back “perhaps disproportionately”, fears of escalating tensions between the West and the Middle East will likely keep investors on the edge. That would place a premium on liquidity and perhaps fuel capital flight. Supply disruption concerns would also push crude oil prices higher in the near-term.

The haven-linked US Dollar and anti-risk Japanese Yen were the best-performing major currencies as geopolitical risks rocked financial markets at the conclusion of last week. This caught investors off guard as liquidity was slowly coming back online following year-end holidays. The pro-risk Australian and New Zealand Dollars depreciated and their moves could extend ahead.

The focus on sentiment meant that the worst reading in US ISM Manufacturing PMI since 2009 passed without much fireworks. Still, this did pour some cold water on rising optimism in global growth as the US and China reached a “phase one” trade agreement that is due to be signed on January 15. Similar pessimistic data out of the Asia Pacific region was also seen in Singapore not too long ago.

WTI crude oil rallied over three percent as prices closed at their highest since May. That was the strongest surge in the commodity over the course of 24 hours in about one month. Anti-fiat gold prices fell as US front-end government bond yields declined in tandem. The yellow metal rallied about 1.52 percent in XAU/USD’s best day since late August.

WTI crude oil extended its push after breaching descending resistance from April. That has opened the door to extending the uptrend from October as prices aim for the 65.77 to 66.58 region. Standing in the way is the psychological barrier between 63.32 to 64.05. Immediate support sits below at 60.91 which may keep near-term losses at bay. 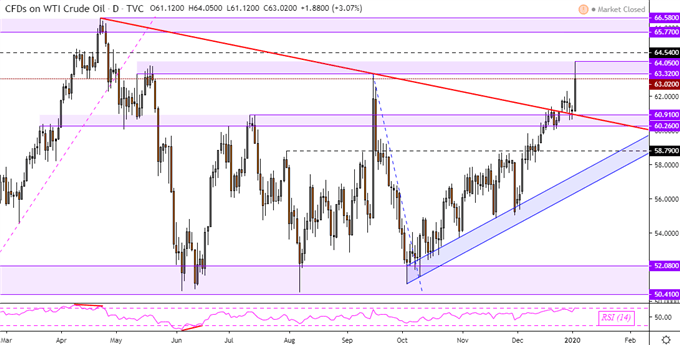