Recommended by Daniel Dubrovsky
What is the road ahead for the British Pound?
Get My Guide

The British Pound was the worst-performing major on Monday in relatively thin trading conditions ahead of year-end holidays. Sterling has been succumbing to selling pressure lately as fears of a “no-deal” Brexit have been on the rise. UK Prime Minister Boris Johnson has vowed to legally prevent an extension to the withdrawal transition period ever since obtaining a strong Conservative majority in Parliament.

The appeal of GBP was also relatively diminished as actions from China to cut tariffs on various products fueled risk appetite. That fueled the sentiment-linked Australian Dollar and New Zealand Dollar higher at the front-end of the session. Though the “risk-on” appetite somewhat cooled on Wall Street as the S&P 500 largely trimmed its upside gap and ended the day just 0.09 percent to the upside.

Dismal US economic data could have been the culprit. Durable goods orders unexpectedly shrunk 2.0 percent y/y in November looking at preliminary estimates. That was the sharpest drop since May. Most of the losses could be traced to aircraft shipments amid the ongoing issue with Boeing’s 737 Max jetliner. Yet, machinery orders fell 1.6% y/y which was the most since April.

This data could speak to the tough road ahead despite progress in US-China trade talks as negotiations move on to sticky issues such as intellectual property. The Canadian Dollar underperformed on disappointing local GDP data, as expected. However, the Loonie trimmed some of its losses as WTI crude oil prices were on the rise during the US trading session.

With that in mind, Asia Pacific equities such as the Nikkei 225 and ASX 200 could be looking to a mixed start on Tuesday. The focus for foreign exchange markets will likely remain on risk trends absent major economic event risk. Keep in mind that illiquid year-end conditions could make for sudden and dramatic volatility around breaking political headlines, especially on the US-China trade front.

As expected, GBP/USD accelerated its top after the emergence of bearish technical signals. Prices have just taken out key support at 1.2950 which has opened the door to testing the November low at 1.2769. This is underpinned by GBP/USD’s break under near-term rising support from October. The pair is down about 3 percent since its rally on the UK General Election. 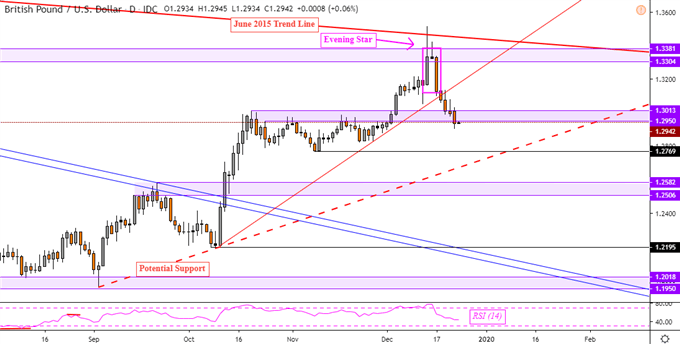