GBP not off the Hook as Parliament Rejects Election, AUD May Gain

The British Pound was the best-performing major currency on Monday, with the Euro following closely behind it. Confidence in Europe's outlook amid the latest Brexit news lifted both United Kingdom and German front-end government bond yields. Early in the European session, reports crossed the wires that the EU agreed to grant a Brexit delay – also known as a “flextension” – until the end of January.

Gains in GBP accelerated heading into a vote in the UK Parliament on the Prime Minister’s motion of an early general election. If Boris Johnson won and then reached a majority, it might strengthen his hand in passing a deal. More worryingly, it might raise the prospects of a “no-deal” outcome if things go south. Speculation of opposition from the Labour Party may have cooled these fears. Indeed, Parliament rejected Johnson’s call.

Elsewhere, Wall Street had a rosy session as the S&P 500 remarkably managed to close at a record high. This is despite the presence of a slew of key US economic event risk due later this week such as local GDP data and the Fed rate decision. Prospects of a US-China trade deal seemed to carry much of the bulls. Earlier in the day, President Donald Trump said that “we are ahead of schedule” on signing a deal.

S&P 500 futures are pointing little higher heading into Tuesday’s Asia Pacific trading session. This may result in further weakness in the anti-risk Japanese Yen from Monday. The sentiment-linked Australian and New Zealand Dollars may find strength on the other hand. AUD/USD does have a speech from RBA Governor Philip Lowe to await, though that will cross the wires closer towards European hours at 6:45 GMT.

GBP/USD near-term support held as prices turned narrowly higher above the psychological barrier between 1.2773 and 1.2798. But, there is still the risk of further declines due to the Bearish Harami candlestick pattern that helped initiate the top from 1.3000. Resumption of weakness places the focus on 1.2773 which if taken out, opens the door to extending declines. A close above 1.3 overturns the bearish candlestick formation.

Chart of the Day – GBP/USD Daily 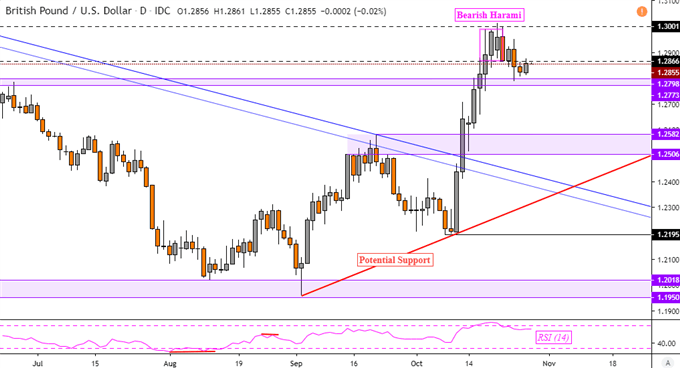