The conclusion of US-China trade talks on Friday left the markets somewhat disappointed as the S&P 500 trimmed upside progress. In particular, the MSCI Emerging Markets Index closed near its upside gap. Something to keep in mind of heading into these discussion was that markets spent the past 48 hours rallying in anticipation. Thus, investors needed further upside surprise to fuel their risk appetite.

In short, there was a partial deal reached between the two economic powerhouses, but a full one will have to wait. This does mean that the US will withhold from raising tariffs against China this week by 5 percent. Friday’s negotiations were part 1 of 3 phases where Presidents Donald Trump and Xi Jinping could sign a deal at the APEC meeting in Chile during the middle of November.

This does mean that until then, sentiment will be left vulnerable to stray headlines regarding trade updates. This uncertainty may have been what cooled the rally in the sentiment-linked Australian and New Zealand Dollars as the anti-risk Japanese Yen gained. The British Pound meanwhile was the best-performing major as the latest headlines continued fueling hopes of a Brexit deal this month.

With that in mind, this could perhaps result in a bittersweet mood in financial markets at the start of the new week as major benchmark stock indexes retrace some of their upside progress. That may in-turn offer a boost to the anti-risk Japanese Yen at the expense of the AUD and NZD. Also, at an unspecified time later today, China’s trade data for September will cross the wires.

The Japanese Yen might have lost ground to the US Dollar, but USD/JPY once again struggled to breach key horizontal resistance at 108.48. The pair continues to show hesitation to commit to an upside break above the critical descending trend line from May. This is as negative RSI divergence shows fading upside momentum. This can at times precede a turn lower, opening the door to a retest of 107.21 – 106.78.

Want to learn more about where the Japanese Yen may go? Check out our USD/JPY Q4 forecast! 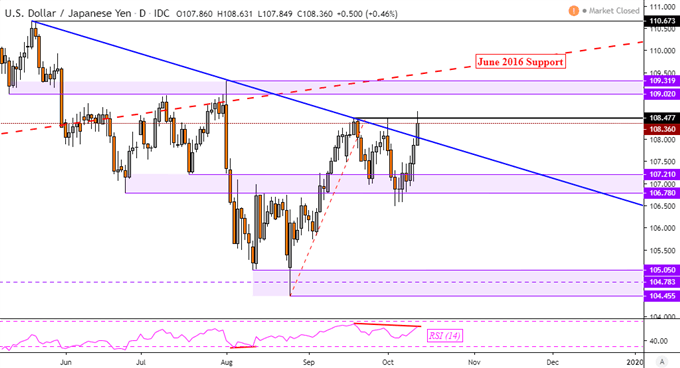