The Australian and New Zealand Dollars rose in Asia Thursday, at the expense of the Japanese Yen, on reports that the US is considering a currency pact with China as part of trade talks currently in progress in Washington.

US President Donald Trump has been quick to accuse China of currency manipulation in the past, saying it holds down the value of its currency to gain competitive advantage in export markets.

Bloomberg reported that the White House is looking at the roll-out of a previously agreed pact as part of an early, partial deal which could also see the suspension of next week’s possible tariff increases against China. The accord would be part of what the White House calls a first phase agreement with Beijing, to be followed by more talks on things like intellectual property.

While details are quite scant at this point, and China’s views unknown, the report does at least suggest that the two sides are talking, and that progress is more possible than recent commentary has suggested.

The report gave a boost to assets with a positive correlation to global growth, and weighed accordingly on countercyclical currencies like the Japanese Yen. The Yen had gained earlier as investors doubted progress would be made this week. They are now re-weighing that view.

The Australian Dollar made further gains on a New York Times report that the US will allow some American companies to supply non-sensitive goods to Chinese telecom giant Huawei, a company whose links to the Chinese state have seen it under heavy scrutiny in the West. 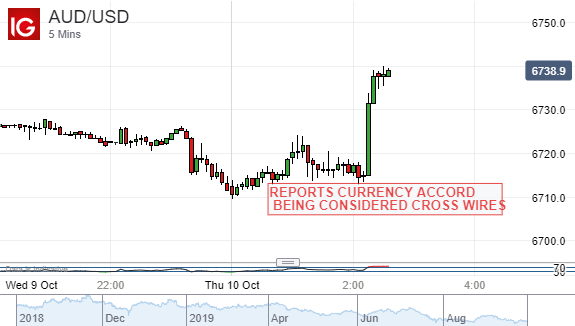 AUD/USD was an obvious gainer, popping nearly a quarter of a cent on the news. Obviously, the situation remains extremely fluid and trade headlines will continue to drive currencies for the rest of this week. Precise details of the proposed pact have yet to be released but, should China be in agreement, markets may well be extremely relieved that the two sides have found a way around their differences over currency policy.