Not sure where the British Pound is heading next? Check out the third quarter fundamental and technical forecast!

The Double Take in Risk Trends

Risk trends experienced a wild ride to wrap up last week as US-China trade tensions waxed and waned. It began with US President Donald Trump threatening to cancel trade talks with China as the S&P 500 declined over 1.2%. Then, there was a partial recovery as the White House clarified that Trump’s decision to hold off on allowing US companies to do business with China’s Huawei referred to government agencies.

Still, the S&P 500 ended 0.66% and 0.50% to the downside compared to Thursday and the previous week respectively. The US Dollar also launched a recovery towards the end of the session, supported by rising front-end government bond yields as near-term aggressive Fed easing bets cooled. The pickup in sentiment was not enough to fully offset prior declines in the pro-risk Australian and New Zealand Dollars.

Meanwhile, the British Pound overwhelmingly underperformed against its major counterparts after the UK economy unexpectedly contracted 0.2% q/q in the second quarter according to preliminary estimates. It was the first contraction since 2012 amidst rising worries over the economic consequences of a “no-deal” Brexit. A second consecutive quarter of declines will place the nation in a technical recession.

GBP/USD thus closed under March 2017 lows on Friday as it looked to extend the dominant downtrend. Ahead lays the psychological barrier between 1.1950 and 1.2018. This area contains the lows Pound Sterling achieved in 2016 which if breached, expose levels not seen since 1985. In the event of a turn higher, keep an eye on the falling channel of resistance from May which may keep the downtrend intact. 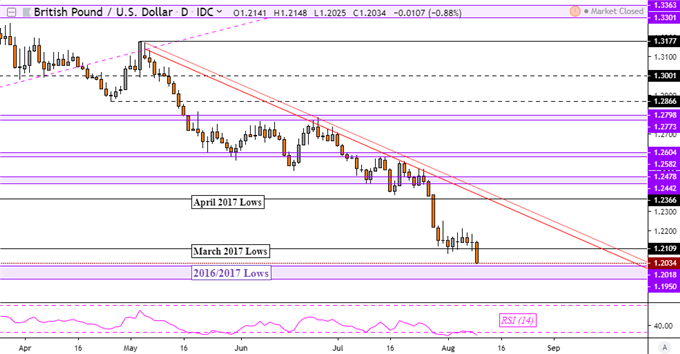 Despite the last-minute upside push on Wall Street, Asia Pacific markets are still vulnerable to risk aversion at the beginning of the new week. A lack of prominent economic event risk for the major currencies places the focus for them on sentiment. The anti-risk Japanese Yen could extend gains from the end of last week as the US Dollar follows suit.