Gold prices rallied over the past 24 hours as the commodity benefited from anti-fiat trade as US government bond yields and the US Dollar declined. The pessimistic mood in global financial markets likely fueled this dynamic as investors coped with the reality that the US-China trade truce is very fragile. Yesterday, President Donald Trump said that he could impose further tariffs against China “if he wanted to”.

On Wednesday, more fuel was poured on the risk aversion flame as disappointing US housing data crossed the wires. Building permits rose just 1220k in June versus 1300k expected, the weakest since May 2017. Meanwhile, disappointing earnings reports from Netflix saw its stock collapse almost 12 percent. Industrials (-2.17%) lead the S&P 500 0.65% to the downside over the past 24 hours.

CSX Corporation shares also sank (-10.27%), closing at their lowest since February. The American holding company focused on rail-based transportation cut revenue forecasts at its Q2 earnings report amidst “unusual” global and US economic conditions. The closely-watched segment of the US yield curve inverted further as odds of a 50 basis point Fed rate cut this month cautiously rose.

This leaves S&P 500 futures pointing cautiously lower as we head into Thursday’s Asia Pacific trading session. The pro-risk Australian Dollar could find itself succumbing to selling pressure at the expense of the anti-risk Japanese Yen (which climbed on Wednesday).

But, the Aussie also has June’s Australian jobs report waiting for it in the hours ahead. With such emphasis on labor market data from the RBA, a significant deviation from estimates could either pour cold water or rekindle near-term rate cut bets. As such, AUD/USD volatility could be heightened ahead.

Taking a closer at gold prices, the commodity closed at its highest since May 2013 as it attempted to break out of persistent consolidation since late June. But, at this point XAU/USD still has highs to clear above 1433 as negative RSI divergence shows fading upside momentum. This can precede a turn lower, so further technical confirmation ought to be required to argue that this may be upside resumption. 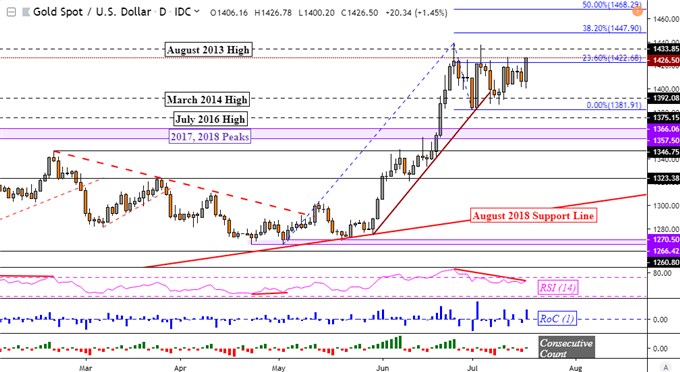