The Canadian Dollar was the best-performing major on Monday, climbing alongside the best day for crude oil prices in three weeks. Canada is a major producer of the commodity, thus higher oil prices can have knock-on impacts on economic activity and inflation, causing the central bank to adjust monetary policy. Expectations of a Bank of Canada rate cut by September have been fading since late March.

Oil prices rallied on Monday amidst reports, which have now been confirmed by US Secretary of State Mike Pompeo, that the nation is planning on ending Iran sanction waivers on imports of the commodity. Mr Pompeo noted that this is anticipated to come to a ‘full stop’ after the May expiration. Much remains ahead for the commodity this week such as energy sector earnings and US trade talks with Japan.

The New Zealand Dollar is at a critical turning point against the Canadian Dollar. On the chart below, NZD/CAD is on the outer boundaries of support at 0.8913. If broken, the pair may enter a new dominant downtrend that would be in line with one of my top trading opportunities for this year. Meanwhile, a falling resistance line from late March seems to be keeping NZD/CAD’s steady descent since then intact. 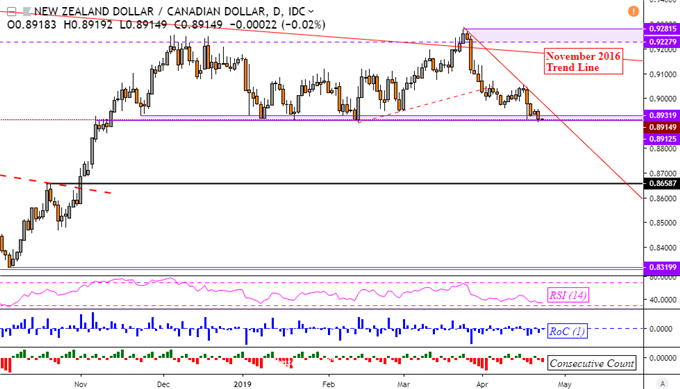 Thanks to a dose of risk aversion during Monday’s Asia Pacific trading hours, the highly-liquid US Dollar narrowly outperformed against its major counterparts. But follow-through in equities to the downside somewhat faded later in the day as the S&P 500 closed just 0.1% to the upside. Not surprisingly, energy shares (+2.05%) propelled the index higher with communication services trailing far behind (+0.73%).

S&P 500 futures are little changed heading into Tuesday’s session during a week that is somewhat quieter in terms of economic event risk. Later on, we will get New Zealand credit card spending data, but NZD/USD may focus more on how equities perform as a risk-sensitive currency pair. Ahead, sentiment readings do warn that crude oil prices may be readying up to turn lower. If true, CAD may reverse some of its gains.

Want to learn more about how sentiment readings may drive crude oil prices? Tune in each week for live sessions as I cover how sentiment can be used to identify prevailing market trends !