The second-to-last week in 2018 was the worst for the S&P 500 in over seven years. The US benchmark tumbled about 2.06% on Friday as frets over a US government shutdown continued to weigh against sentiment. After Wall Street close, the US Senate adjourned for the night which resulted in the government heading for a partial shutdown at the stroke of midnight. Talks were scheduled to continue over the weekend.

Looking at FX, the US Dollar managed to outperform against its major counterparts despite the political risk. The world’s reserve currency managed to catch haven bids as US government bond prices rose, reflecting a flight to safety. In addition, the Fed’s preferred measure of inflation (Core PCE) clocked in at 1.9% y/y in November, up from 1.8% in October as expected. But GDP softened unexpectedly to 3.5% in Q3 (see economic calendar below).

Given the aggressive selloff in US equities, the anti-risk Japanese Yen appreciated against its major counterparts. The funding currency often gains in pessimistic market environments, reflecting traders unwinding carry trade positions. On the opposite side of the spectrum are the pro-risk Australian and New Zealand Dollars which depreciated across the board.

Over the weekend, US government officials were not able to agree on funding, resulting in a shutdown. With that in mind, Asia Pacific benchmark indexes look vulnerable at the beginning of this week. This is further exacerbated by general illiquidity around the holidays. Such, we may see risk aversion with volatile price trading. With that in mind, the Japanese Yen is thus likely to extend its gains as AUD and NZD weaken.

NZD/JPY continues to extend declines after failing to confirm a break above the July 2017 descending trend line. The pair has closed under the 61.8% Fibonacci retracement at 74.82, opening the door to testing the 78.6% level next at 73.72. Beyond that lays 2018/August 2016 lows around 72.22 which could be a stubborn support level. 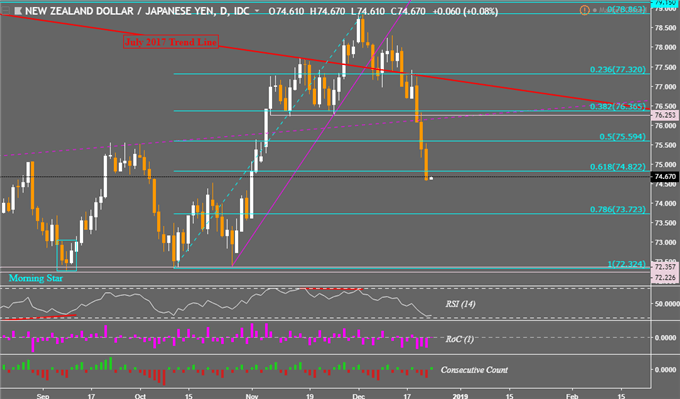 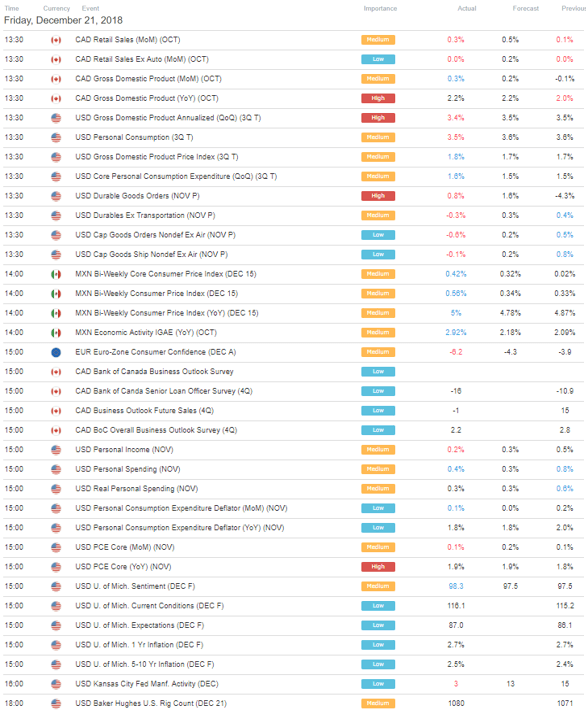