Asia Stocks to Pause Declines Ahead of US NFPs? Crude Oil Jawboned

As expected, Wall Street gapped lower after being closed on Wednesday, digesting the aggressive risk aversion that occurred in global financial markets. But, the S&P 500 almost filled its gap and ended the day about 0.15% lower. Coincidentally, the moment when US shares started rising was as European ones went offline for the day.

The last minute improvement in risk appetite may have been for a couple of reasons. Around the time of the push higher in the S&P 500, you had a combination of positive developments. First, the US Congress passed a stopgap to fund the government through December 21st. Second, markets may have been digesting cautious Fed commentary.

Earlier in the day, Dallas Fed President Robert Kaplan noted that growth would be slower next year. Then, Atlanta President Raphael Bostic noted that the central bank should proceed with caution as they remain data dependent. Speaking of, investors and speculators may have unwound bets ahead of tomorrow’s highly anticipated US jobs report.

With that in mind, while the anti-risk Japanese Yen largely outperformed Thursday, some gains were trimmed. The opposite was the case for the pro-risk Australian and New Zealand Dollars which reversed some of their losses. Meanwhile the US Dollar traded rather mixed, gaining against AUD and NZD while underperforming versus JPY.

Crude oil prices were jawboned by the latest OPEC news and official US output statistics. Initially, the commodity declined following an underwhelming estimate from Saudi Arabia in terms of the consensus on production cuts. Then, DOE crude oil inventories contracted by larger-than-expected at 7.32m barrels per week. This helped push the commodity higher as the sentiment-sensitive asset climbed with equities.

Given a relatively quiet Asia Pacific trading session in terms of economic event risk, the main focus for currencies will probably be risk trends. Given the last minute push higher on Wall Street, we may see stocks pause their declines until tomorrow’s US jobs report is released. Meanwhile, ASEAN FX eye how their respective central banks might have slowed upholding their currencies via their foreign reserves. 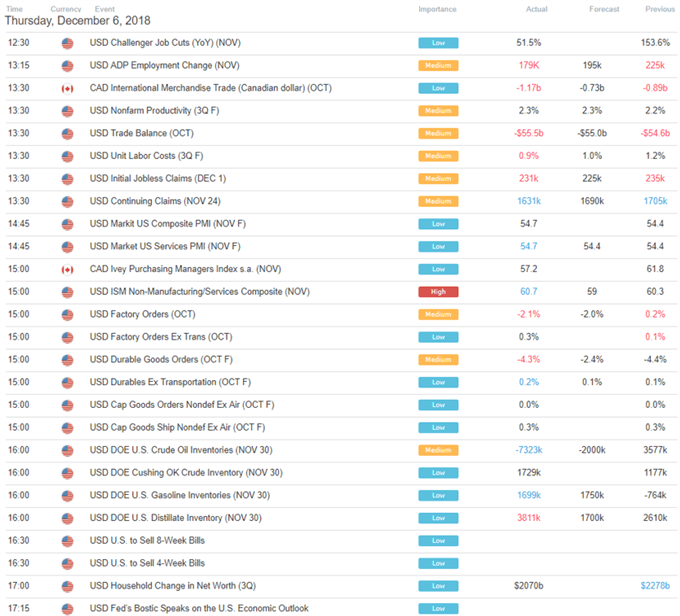