The British Pound continued being jawboned by the latest Brexit headlines. Earlier this session, reports that a couple of members of parliament could resign sent it lower. Then, Sterling was uplifted as UK Prime Minister Theresa Mayannounced a Brexit deal that her cabinet agreed on. By the end of Wednesday’s session, GBP/USD was little changed.

Not only is this trading dynamic the case on a near-term basis, but Sterling in general has been struggling to find direction lately. Looking at an equally weighted basket on the chart below, GBP remains in consolidation mode after it halted its descent in August. More obstacles remain down the road for Brexit talks including Mrs. May getting her draft pushed through parliament and an EU-UK summit some time later this month.

Crude oil prices halted its longest consecutive losing streak since at least 1984 in the wake of comments from OPEC’s President. United Arab Emirates Energy Minister Suhail Al Mazrouei said that the cartel and its allies will ‘adjust production as needed to balance the market’. The sentiment-sensitive commodity also followed S&P 500 futures higher into Wall Street open.

Speaking of, most US benchmark stock indexes ended the day lower. The S&P 500 dropped about -0.76% as Apple shares slid about 2.82% and entered into bear market territory. As such, we may see Asia Pacific stocks echo weakness from Wall Street. This may bolster the anti-risk Japanese Yen.

Meanwhile the pro-risk Australian Dollar may look past domestic jobs data in the medium-term given that the RBA is committed to keeping rates unchanged for the time being. AUD/USD is struggling to obtain bullish confirmation after trying to overturn its dominant downtrend. 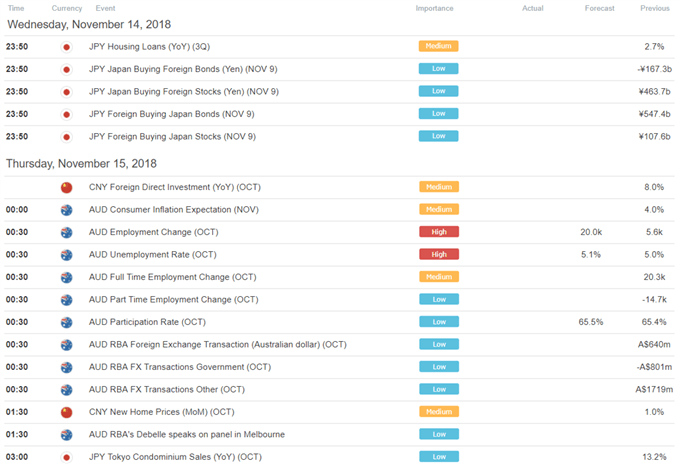