In this edition of Central Bank Watch, we’ll review comments and speeches made by various Federal Reserve policymakers this month after the communications blackout window around the November Fed meeting ended. While FOMC officials agree that it was necessary to begin tapering asset purchases, it’s clear that markets think more need to be done as US inflation rates have surged to 30-year highs.

The decision to announce a taper to asset purchases at the November Fed meeting was a well-telegraphed, unsurprising development for anyone following commentary in recent months. But even as US inflation rates have soared, Fed policymakers are still peddling the idea that stimulus withdrawal will be a slow, deliberate process, so as to not upset the economic recovery underway. Moreover, policymakers have pushed back against the shifting narrative in rates markets, too.

November 5 – George (Kansas City president) suggests she still sees inflation as a transitory episode, noting “I would not disagree with those who say inflation should back off a bit.”

November 8 – Clarida (Fed Vice Chair) says that the “necessary conditions” to raise the Fed’s main rate will likely have been met before the end of 2022.

Harker (Philadelphia president) notes that he does not believe that rates will rise until the taper is complete.

Evans (Chicago president) comments that he still believes that the rise in inflation is “temporary,” and doesn’t think rate hikes will be warranted until 2023.

November 9 – Daly (San Francisco president) says that the Fed will have a better idea about whether or not inflation’s rise is transitory by “the summer of 2022.”

November 10 – Bullard (St. Louis president) talks up potential hikes in 2022, suggesting “based on where I think we are today I actually have two rate increases penciled in for 2022 ... that could change by the time we get into the first half of next year in either direction really.”

Daly pushes back against the idea that the Fed will act quickly, noting “right now it would be premature to start changing our calculations about raising rates,” and that while “we have a challenge right now. Inflation is high – it’s eye-popping – and it catches people’s attention and it hurts their pocketbook…the issue is that we still have Covid.”

November 15 – Barkin (Richmond president) asks for patience, saying that “it's very helpful for us to have a few more months to evaluate, is inflation going to come back tomore normal levels? Is the labor market going to open up?” and “I think it's helpful to have some time to see where reality is in thiseconomy” before rates are raised. 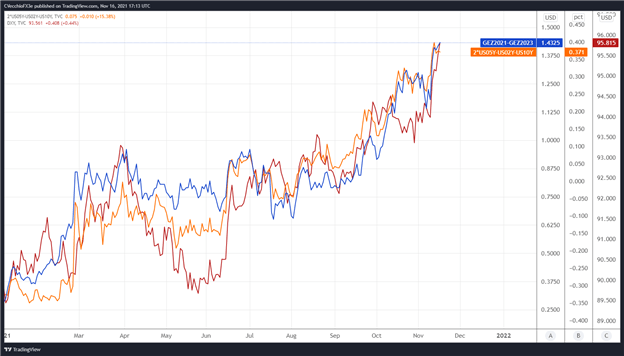 As has been the case for several weeks now, continually elevated Eurodollar spreads alongside action in the US yield are consistent with the 2013/2014 period that suggests a more hawkish Fed is soon to arrive – even if the narrative being pedaled by FOMC officials is quite different. 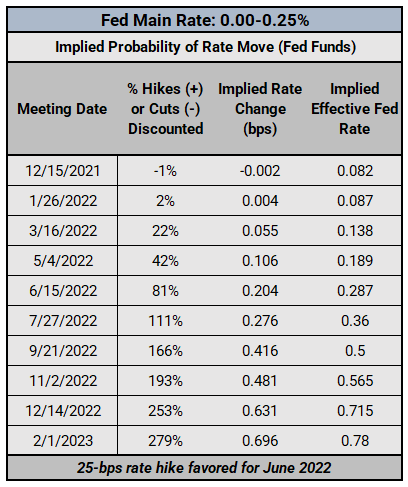 Rate hike expectations remain quite elevated through mid-November, holding onto their gains from October and rebounding from their dip after the November Fed meeting. Earlier this month, ahead of the November Fed meeting. Fed funds futures were discounting an 81% chance of a 25-bps rate hike in June 2022 – and that’s exactly where they remain today. This remains the most hawkish that rates markets have been since the start of the pandemic. 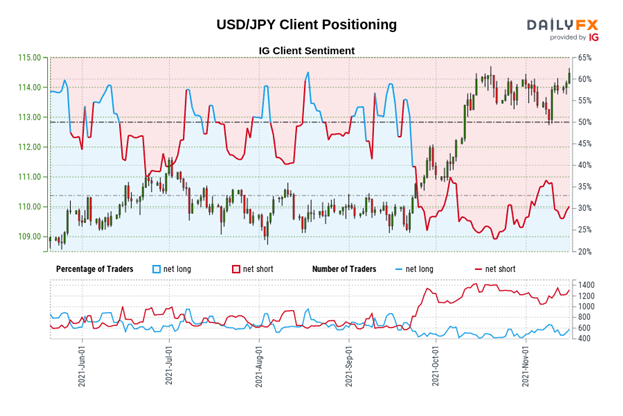