- Global equity markets are rallying as risk appetite has improved thanks to improving perception regarding a potential US-China trade deal.

- A directional move in tandem by Gold and the Japanese Yen is hardly surprising; traders should be watching out for a major breakdown in the precious metals complex.

When looking back at 2019, traders may find that this past week was pivotal on several fronts. The US-China trade negotiations appear to be coming to a crescendo with a summit between US President Donald Trump and Chinese President Xi Jingping in the works for later in March. Concerns over the US economy sliding into a recession have been pushed back, at least temporarily, after Q4’18 US GDP came in above expectations. Elsewhere, the Brexit saga appears to be headed towards de-escalation with the odds of a hasty no deal, “hard Brexit” dropping.

Traders may also remember this week as the week that Fed Chair Jerome Powell ‘found his voice’ after several months of wavering conviction. Between, October and January, there are a handful of occasions in which Fed Chair Powell could be considered to have changed his tone. On October 3, 2018 he indicated that be believed that ‘rates are long way from neutral,’ implying that many more rate hikes were coming. Then, on November 28, he implied that ‘rates are close to neutral,’ or that the Fed was nearing the end of its hike cycle.

Initially this culminated in the Fed’s glide path of interest rates being reduced at the December 20 policy meeting.More recently, on January 4 at a roundtable discussion with former Fed Chairs Bernanke and Yellen, Fed Chair Powell said that he was ‘open to changing normalization,’ in effect striking the Powell Put. Then, at the January 30 FOMC meeting, beyond staying ‘patient’ on further moves and ending the policy of ‘gradual rate hikes,’ it was made clear that the Fed was eying the end of its balance sheet run-off by the end of the year.

But traders may now find that Fed Chair Powell’s tone has been fairly consistent over the past month. By using his time on Capitol Hill this week to reaffirm the Fed’s neutral stance, the central bank chief more less told market participants that the Fed was looking past short-term gyrations.

Brexit, the US-China trade war, concerns over a US recession? Not in the tea leaves, according to Fed Chair Powell; not that the Federal Reserve is moving on policy either way anytime soon, but talks of a rate cut are decidedly overblown. The Federal Reserve is due to stay on hold for the foreseeable future. According to Fed funds futures, there is no greater than a 10% chance of a 25-bps rate hike or cut throughout 2019.

There are movements in interest rate markets beyond the 2019 calendar year that may be contributing to the dramatic shift in risk appetite underpinning the breakdown in safe haven assets like Gold and the Japanese Yen. We can measure whether or not a rate cut is being priced-in for 2020 by examining the difference in borrowing costs for commercial banks over a one-year time horizon in the future. The spread between the Eurodollar June 2019 and 2020 contracts as well as the Eurodollar December 2019 and 2020 contracts remains below zero – but these spreads have moved sharply back towards positive territory this week. 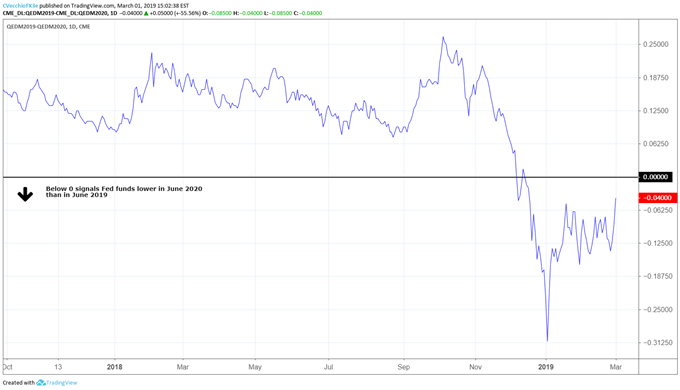 In fact, the Eurodollar June 2019 and 2020 contract spread is up 9-bps this week to -4-bps overall, up from the -31-bps priced in from the start of 2019. That’s right: since January 1, an entire rate cut has been priced-outby markets. By no means does this indicate that a Fed rate cut is coming anytime soon; but rather, it suggests that the period of ‘patience’ that Fed Chair Powell has been calling for over the past month will be the default speed for the foreseeable future.

With key thematic influences seemingly breaking all in favor of stronger risk appetite, safe have assets have been hit hard. The Japanese Yen has understandably weakened as global equity markets have rallied, and the slight bump in US Treasury yields has filtered through into hitting precious metals as well. With the prospect of a US recession and thus a 2019 rate cut odds seemingly being pushed lower this week, Gold prices have been hit hard. In fact, the performance this week was Gold’s worst performance (-2.62% at the time of writing) since the first week of May 2017 (-3.11%). 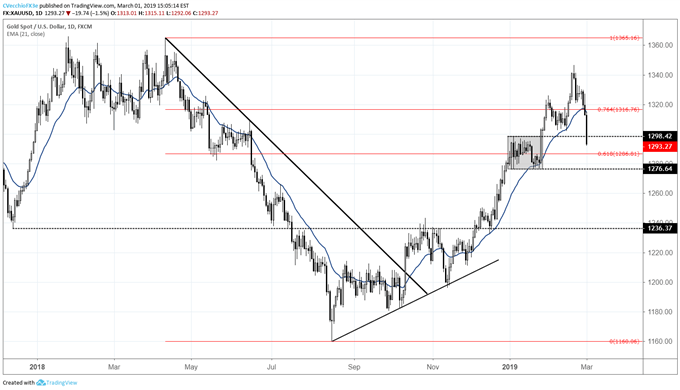 The technical damage done to the charts this week is palpable. Since November 28, Gold had maintained its closing level at or above its daily 21-EMA; that is, until February 28. The first close below the daily-21 EMA in (exactly) three months is a strong sign that the “buy the dip” mentality is no longer appropriate here. Even if weekly losses in excess of -2% have typically been associated with washout, exhaustion moves and near-term lows, it stands to reason that a more significant bearish bias may be appropriate moving forward now that this key moving average has been lost.