- The US Dollar surge over the past week has little to do with changes in market pricing of the Fed’s rate hike timeline.

- 25-bps hikes are being priced-in for September and December 2018, but then no rate move is anticipated until at least June 2019.

The US Dollar has been on a tear in August, with the DXY Index having gained +2.24% month-to-date. If today was the last day of the month, the DXY would be posting its second best month of 2018, and its best August since 2008 (+5.67%). Similarly, the greenback is in the midst of its fifth consecutive month of gains in a row. Needless to say, it’s been a favorable trading environment for the US Dollar.

Earlier this year, particularly between March and June, there is a strong case to be made that the US Dollar’s gains were largely driven by the market’s changing perception of the Federal Reserve’s rate hike cycle. Even though the Fed, via its Summary of Economic Projections, had been outlining the path for three to four rate hikes in 2018, rates markets were only pricing in two hikes total this year back in March.

It stands to reason, then, that while the US Dollar rally through August has been impressive, it hasn’t been for the typical reasons. There is good reason to believe that, without the US-China trade war or the Turkish Lira collapse, we wouldn’t be witnessing the form or fashion of US Dollar strength that has materialized thus far.

Ultimately, this leaves the US Dollar’s fundamental flank exposed moving forward. Without the Turkish Lira implosion and its speculative knock-on impact to the Euro – which is 57.6% of the DXY Index –the DXY breakout would not have materialized in the past week. With two hikes already priced in for the rest of the year, this may be ‘as good as it gets’ for the buck. The fundamental backdrop for the US Dollar is strong now, but it doesn’t seem like conditions can get any better. 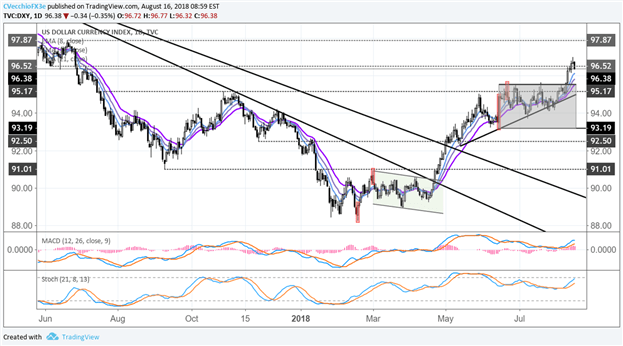 As long as the Turkish Lira crisis is ongoing and the US-China trade war continues, the fundamental drivers that have carried the greenback to its 2018 high yesterday remain in place. The technical structure of the DXY Index is stil bullish, as price continues to hold above its daily 8-, 13-, and 21-EMA envelope. Similarly, both daily MACD and Slow Stochastics are issuing bullish momentum signals. Through the end of the month, the daily 13-EMA should be watched for support, which price hasn't closed below in August.