- October has been the second-worst month of the year for the US Dollar.

- The commodity currency bloc has fared well at the start of Q4.

- October marks the second of four consecutive months of gains for the S&P 500.

For October, we continue to focus on the period of 2009 to 2014. The small sample size is not ideal, and we recognize that there is increased statistical stability with using longer time periods. However, because of the specific uniqueness of the past six years relative to any other time period in market history - the era of quantitative easing - we've elected to attempt to increase the stability of the estimates with the shorter time period. 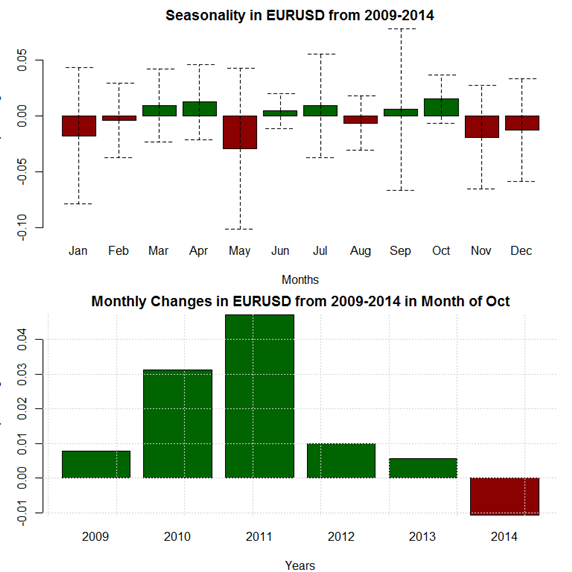 October has been the best month of the year during the QE era for EURUSD. Buoyed by an outsized performance in 2011, the Euro has been the second-best performer overall in October versus the US Dollar, only trailing the Australian Dollar. While such historical performance would normally lead us to an outright bullish bias for EURUSD, it’s worth noting that EURUSD’s performance has deteriorated each year since 2011. From 2009 to 2011, EURUSD averaged a gain of +287-pips in October; from 2012 to 2014, EURUSD averaged a gain of +17-pips. Accordingly, our seasonal study suggests only a moderate upside performance in EURUSD. 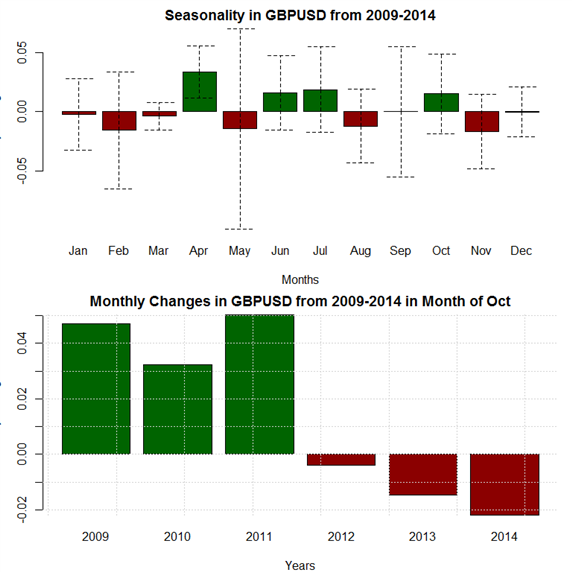 Like EURUSD, GBPUSD’s performance in October has been characterized by two distinct periods: the strong 2009 to 2011 period; and the weak 2012 to 2014 period. Overall, October has been the least-bullish month of the year for GBPUSD, and recent performance has been deteriorating rapidly. From 2009 to 2011, GBPUSD averaged a gain of +432-pips in October; from 2012 to 2014, GBPUSD averaged a loss of -134-pips. A neutral bias is appropriate for GBPUSD. 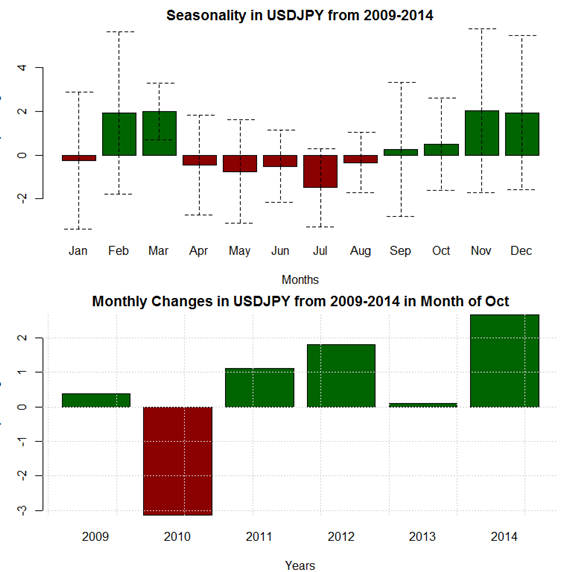 The October seasonal forecast for USDJPY is slightly bullish. The average performance calls for higher prices, with five of the past six years having produced gains. In context of other instruments’ seasonal tendencies, a slight USDJPY bullish bias makes sense: risk assets (like the Australian Dollar and the S&P500) are expected to rally, and this may offset broader USD-based concerns that would weigh across the USD-spectrum (like the Federal Reserve pushing back its rate liftoff timeline). 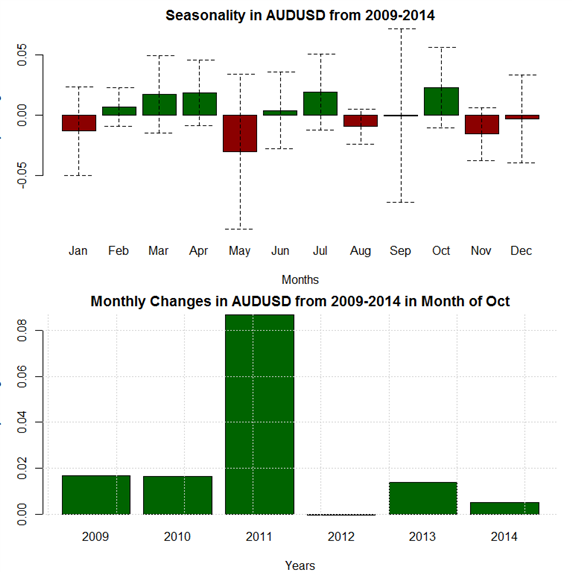 October has been the best month of the year for AUDUSD, and the Australian Dollar has been the best performing major currency versus the US Dollar during the month. While skewed to the upside by a large outsized performance in 2011 (+868-pips), AUDUSD has gained each year during the QE era. As such, we favor further gains in the pair. 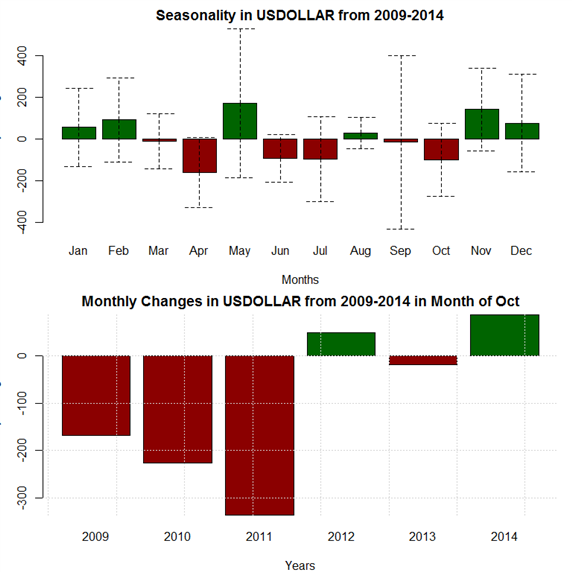 October has been the second-worst month of the year for the USDOLLAR Index (an aggregate of EURUSD, GBPUSD, AUDUSD, and USDJPY) during the QE era. Although gains have materialized in two of the past three years, the average performance for the USDOLLAR Index during October is -102.14 points. Given the breakdown of the individual components of the index, we expect losses to materialize in October once again. 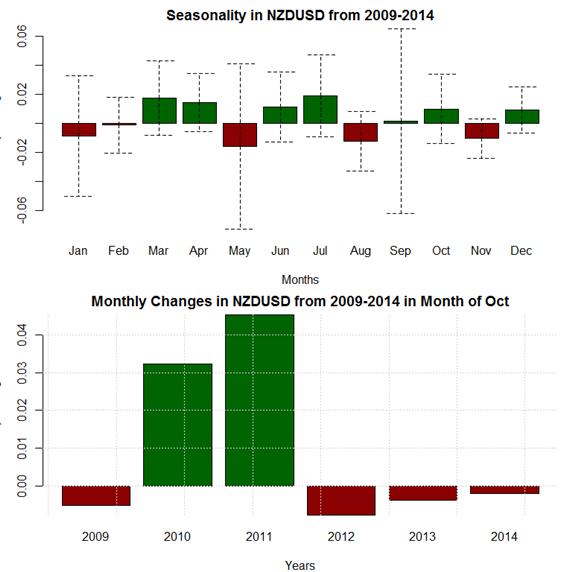 The seasonal forecast for NZDUSD in October is neutral. While the average performance is positive (+98-pips), losses have materialized in three consecutive years, and four of the past six overall. It seems October is a ‘boom or bust’ month for NZDUSD during the QE era: either an outsized gain; or a meager loss. Even if the New Zealand Dollar is forecast to have a middling performance, broad US Dollar underperformance could boost NZDUSD. 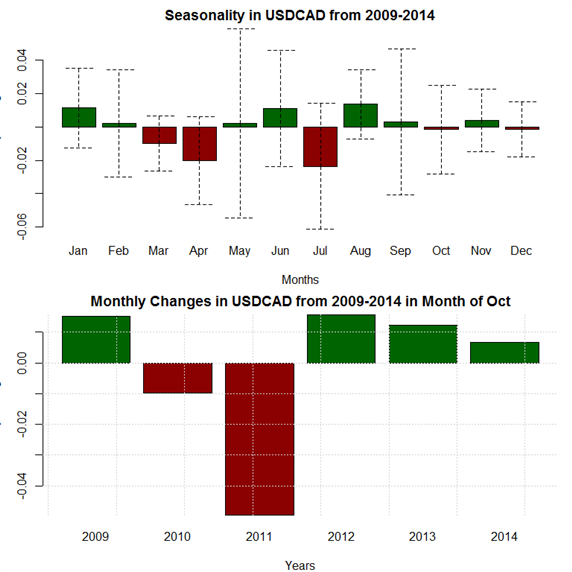 October hasn’t produced much by way of consistent performance for USDCAD during the QE era, and as such, the seasonal forecast is neutral. USDCAD has averaged a loss of -15.5-pips in October despite seeing gains in four of the past six years. It’s worth noting that October has produced a smaller range than September, and into year-end, USDCAD month ranges have narrowed in terms of disparity of performance. 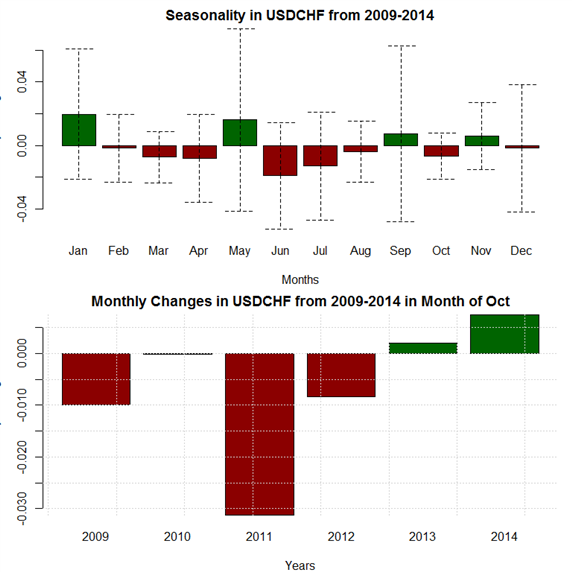 October has been a seasonally weak month for USDCHF, even if the performance range has been smaller than any other month during the QE era. USDCHF has rallied in each of the past two years, but its performance from 2011 to 2014 was largely determined by EURUSD (given the floor in EURCHF until January 2015). Among the USD-pairs, USDCHF is perhaps the least interesting from a seasonal standpoint through the end of the year. 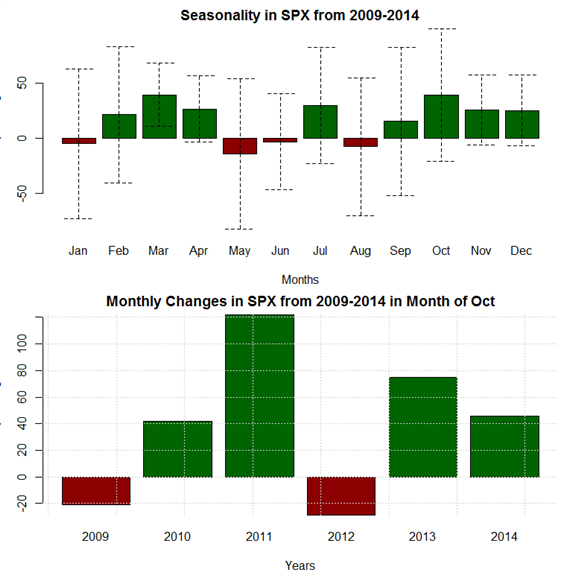 ‘Sell in May and go away?’ We’re supposed to be on the other side of ‘away’ now that the summer trading months have ended, and markets haven’t turned around as has been typical during the QE era. The S&P500 started September at 1968 and ended the month at 1911. Q4 has been the most bullish quarter of the year for US equities during the QE era, so if there was ever a time for a recovery, it would be now. The S&P500 has rallied in four of the past five years, and has averaged a gain of +39.15 points during October during the QE era. 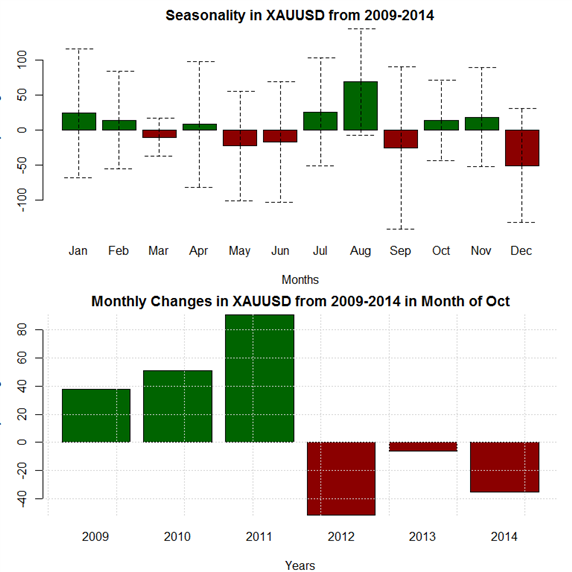 The Gold-USD relationship the past few years has been fairly straightforward: as the US Dollar has strengthened since its 2011 lows, Gold has weakened dramatically from its 2011 highs. As such, in a month where the US Dollar is expected to weaken broadly, it’s no surprise that October is expected to produce a positive performance for Gold. Despite the average net-gain over the past six years, much like in EURUSD and GBPUSD, the October performance has been drastically different depending upon its measurement period: from 2009 to 2011, Gold averaged a gain of $59.84; from 2012 to 2015, Gold averaged a loss of -$30.93. Accordingly, only a slightly bullish bias is warranted.