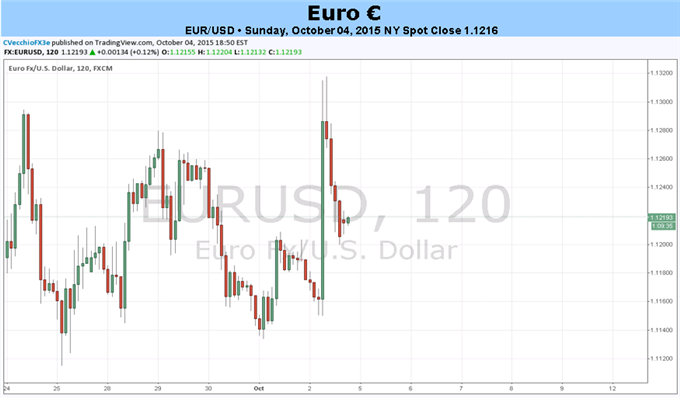 As expected, with the Euro holding its ground as a funding currency, it has been subject to gyrations in global bond and equity markets in recent days as well; the lack of significant movement over the week translated in a relatively quieter week than the once preceeding it. 1-week EURUSD historical volalility dropped to 5.79% as of October 2, down from 10.27% on September 25. Markets don’t think the volatility lull will last for that long, however, with 1-week EURUSD implied volatility up at 9.10%.

There may be some residual impact from the worst US Nonfarm Payrolls report of 2015 in the coming days, and a repricing of the Federal Reserve’s rate hike path against a backdrop of a weaker US economy will surely provoke larger swings in bonds, commodities, equities, and FX markets alike. However, beyond external influences, traders engaged in the EUR-crosses may not find that much to work with from the economic data side of things over the coming five days. The calendar is particularly light, with only Tuesday’s September PMI data piquing any interest.

In absence of a meaningful economic docket, traders may find the oft-overlooked ECB meeting minutes of greater interest this time around. The minutes will be released as speculation over when the ECB might ease next has heated up, perhaps simply as a response to the Fed keeping rates lower for longer or due to slumping inflation readings (the 5-year, 5-year inflation swaps closed down at 1.580%).

Ahead of the minutes, we already know that the ECB downgraded its growth and inflation forecasts for 2015 to 2017 at the corresponding meeting, which leads us to believe there was also likely a meaningful conversation on what to do should should growth and inflation readings disappoint. Along these lines, any color that can be discerned regarding the ECB’s future policy actions, for example, the path of the interest rate corridor or the prospect of expanding or lengthening the current QE program, could prove material to shaping rate expectations in the near-term.

Until markets pin down the likelihood of the ECB easing later this year or early next, the Euro is very much in a holding pattern. Reflexively, any prolonged period of Euro strength going forward probably raises the probability that the ECB will ease in the coming months, as a stronger trade-weighted Euro will only hurt exporters and dampen inflation. Rallies in the Euro still can draw some energy from a lingering net-short position held be speculators. The CFTC’s most recent COT report showed that speculators held 87.7K net-short contracts at the end of the week of September 29, 2015. Longer-term, however, positioning is not in the way of a further bulld up:traders were much more short in August (115.2K contracts) and in March (226.6K contracts). –CV