Major US indices erased early losses on Monday and extended a four-week bullish trend, helped along by a rate cut in China and falling Treasury Yields in the United States. At the close, the Dow Jones, the Nasdaq100 and the S&P500 gained 0.45%, 0.75% and 0.40%, respectively. Most sectors of the S&P 500 traded higher, with Consumer Staples leading the gains. Meanwhile, the worst-performing was the Energy Sector, after the Chinese central bank's unexpected move to lower interest rates (amid disappointing economic data on retail sales, industrial production, and fixed assets) fueled concerns about a broader economic slowdown. Companies like Halliburton Co and Schlumberger NV led the declines. The Energy sector closed with a loss of 1.98%. All eyes on corporate earnings from big retail companies this week, starting with Walmart and Home Depot tomorrow. 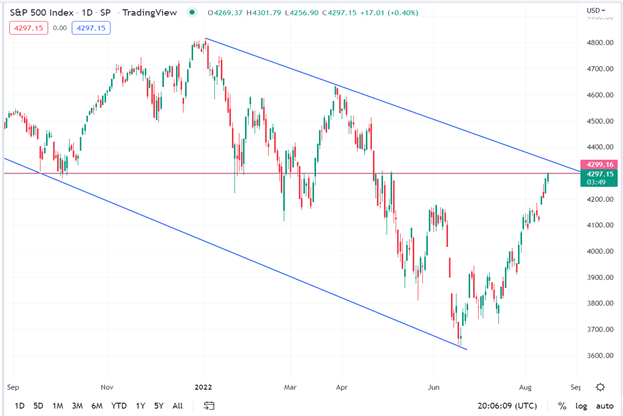 On the economic front, like China, the United States released disappointing economic figures today. The Empire State Manufacturing Index Survey, although only an indicator of the health of manufacturing in a region and not a broader measure, plunged 42 points in the month of August. The figure stood at -31.3 from a +11.1 in July. It also marked the second largest drop since the survey’s inception (in 2001), as well as the second lowest reading. However, while the drop in shipments and new orders confirmed a slowdown, there were some signs of hope, as the prices paid index fell and the six-month expectations for general business conditions rebounded.

As one would expect, the disappointing news from China and the US provided support to the safe-haven USD as the USD index (DXY) gained, which also helped to drag down prices of commodities like oil and gold as China is the largest importer of crude oil and the largest gold consumer. The September WTI crude contract dropped more than 3.4% to below $89/brl and the Comex Gold contract for December gave up 1% to close below $1,800 per ounce.

All eyes are on Iran’s decision regarding the nuclear deal that could come soon. If accepted, the result could mean higher oil production and in-turn, lower prices. In addition, this week we will see the release of US retail Sales, Industrial Production, Housing, Manufacturing, Employment and FOMC minutes of the July 26-27 meeting, which can keep interest circulating around the US Dollar.