Crude Oil Price Caught in Crosswinds Ahead of the Fed. Will Recession Fears Weigh on WTI?

Crude oil started the week on a positive note ahead of the Federal Reserve meeting this Wednesday, where the market anticipates that they will raise rates by 75- basis points (bps).

The rhetoric from the Fed to quell damaging inflationary outcomes appears certain to lead toward an economic slowdown. The debate is centred around the potential recession and its scope and depth.

Such a slowdown in the world’s largest economy would normally see crude come under selling pressure with dwindling demand. Due to supply side constraints, WTI has remained relatively buoyant, and this is the dilemma for oil traders.

An indication of underlying supply and demand dynamics within the oil market is backwardation. It occurs when the contract closest to settlement is more expensive than the contract that is settling after the first one.

It highlights a willingness by the market to pay more to have immediate delivery, rather than having to wait. Backwardation had been rising prior the Russian invasion of Ukraine along with the price of oil.

The chart below illustrates that the current level of backwardation remains at an elevated level and could be an indication that supply frailties remain more of a concern than the impact of a recession.

Volatility in the oil market, as measured by the OVX index, has been relatively benign and may reveal that the market is not overly concerned with current pricing. 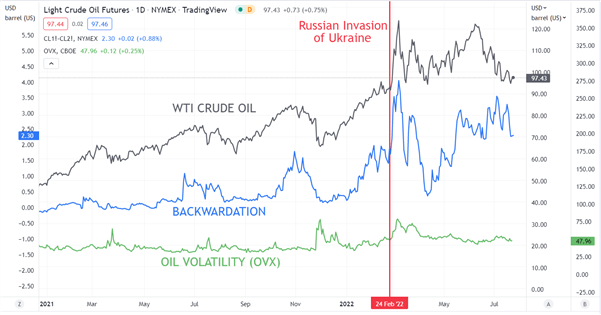 Elsewhere, Libya has added some supply of late. Political unrest saw production from the OPEC member fall under 600,000 barrels per day since April. Mohamed Oun, the Libyan oil minister, announced that production is back over 1 million barrels per day after coming to terms with opponents.

This is welcome news for oil consumers at a time when other OPEC nations are unable to meet their production targets.

The US Dollar (DXY) index has been sliding in the last few sessions and this might have been the factor to lift crude at the start of the week.

Looking ahead, the Fed meeting remains the focus and although the market is forecasting a 75-bps hike, a surprise 100- bps rise is an outside chance.