The Australian Dollar firmed after the RBA meeting minutes revealed little that we didn’t already know.

The subtle nuance could be that the bank was set to hike rates at their August meeting before they saw jobs and trade data. While they noted the strength in both, subsequent releases were much stronger than expected.

A trade surplus of AUD 15.96 billion for the month of May was a big beat on AUD 10.85 billion anticipated.

In regard to May’s employment picture, July’s meeting minutes said, “Members noted that the resilience of the Australian economy continued to be evident in the labour market.” The latest data is much stronger.

Many spot prices of commodities have recently moved significantly lower, but Australia’s bulk commodity exports are mostly priced in long term contracts in USD. Agreements can be from 3 months to 15 years.

With AUD/USD moving lower over the last few months, this could be a contributing factor to the large trade surplus. The driving factors behind these commodity movements are the same influences impacting other risk assets such as equites and growth linked currencies such as the Aussie.

The market is currently pricing in a 50-basis point (bp) hike for their 2nd August meeting. Dr Lowe had previously said that the August meeting will be a discussion around a 25 or 50 bp rise in rates.

Second quarter CPI will drop Wednesday 27th July, and this could be the driving force in any variation to that guidance. The RBA said previously that they expect CPI to hit 7% in the December quarter.

As has been outlined here several times before, a red hot Australian CPI number could be arriving next week and that will cause problems for the RBA.

Globally, central banks are front loading rate hikes to counter excessively loose pandemic policy. The idea is to knock out inflation and to allow room for movement further down the track should economic conditions need stimulus.

Last week the Bank of Canada raised rates by 100 bp and the Fed is expected to raise by at least 75 bp next week.

The focus now shifts to next week’s Australian CPI data. If the overseas experience is anything go by 7% inflation might be here before the fourth quarter.

The Australian Dollar could be in for a bumpy ride if the RBA is forced to a more hawkish path against a backdrop of increasing uncertainty around global growth. 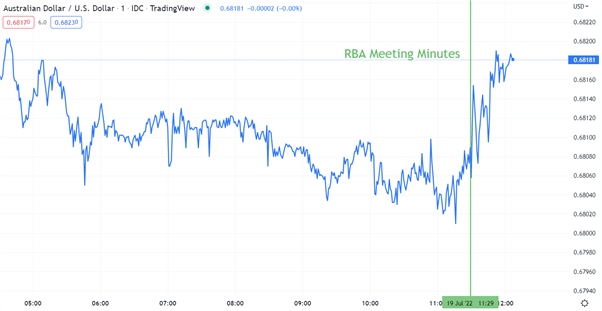