Crude oil has surged to 3-month highs as a number of factors over the last week have tightened the market.

This week, the world’s largest importer of the energy, China, eased lockdown restrictions in Beijing and Shanghai. This potential uplift in demand comes at a time of limited supply due to the Ukraine war.

OPEC+ upped their targeted quota to 648k barrels per day last week, but the market has reservations that the cartel will be able to meet these increases.

Morgan Stanley and Goldman Sachs have re-iterated their forecast of US$150 and US$140 bbl respectively for later this year.

As the West continues to escalate embargos of Russian oil exports, this has pushed them toward innovative efforts of distribution. It has been reported by Bloomberg this week that the first mid-Atlantic Ocean ship-to-ship transfer occurred in late May.

It is anticipated that the supertanker will receive a few more loads before heading to its destination, anticipated to be India.

Ship-to-ship transfers are not unusual, but they are normally done in safe calm waters, rather than on the high seas. As the sanctions start to bite, mid ocean transfers could become a regular feature of the market.

Backwardation remains in play in the oil market, and the move from US$110 bbl to over US$ 120 bbl was pre-empted by a spike in backwardation to over US$3 bbl. 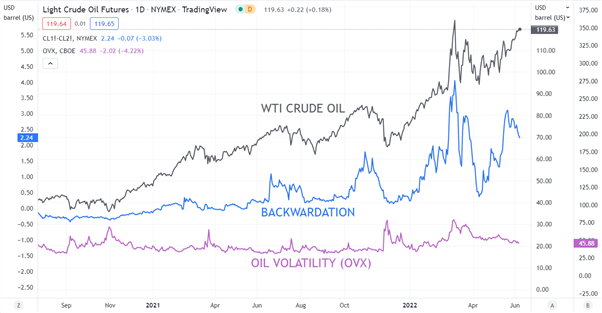 Backwardation is when the contract closest to settlement is more expensive than the contract that is settling after the first one. It highlights a willingness by the market to pay more to have immediate delivery, rather than having to wait.

Backwardation has eased off in the last few days and could indicate that a push to the March high of US$ 130.50 may not be imminent for now.

Potentially offsetting that is the OVX index, a measure of oil volatility. It has remained sanguine toward this run up, which could indicate that the market is getting used to elevated prices.