Gold Price Explodes Higher on Sinking Yields and Ukraine Woes. Where to for XAU/USD?

Gold shot higher on Friday as the markets erupted in the aftermath of Thursday’s record-breaking US CPI number and escalating geo-political tensions around the Ukraine border.

The US 10-year Treasury note is yielding about 1.95%, notably lower than the high seen on Friday at 2.06%. The Treasury curve is similarly seeing lower returns.

Government bonds around the globe have been bought as investors rush to more secure securities, driving yields lower

This has seen real yields push further into negative territory, with US 10-year real yields now at -0.48%, lower than -0.37% seen on Friday. Real yields are calculated by subtracting from the nominal return the market-priced inflation rate for the given tenure.

This is supportive for gold prices as the alternatives to the precious metal become less attractive.

Her comments were in stark contrast to those made by St. Louis Fed President James Bullard on Friday, where he called for 100 basis points worth of hikes within the next 3 FOMC meetings.

The White House announced on Friday that Russia could invade the Ukraine at any moment, and this sent markets into a spin. Risk assets sold off and safe havens were sought after. Gold rallied at the same time as the US Dollar was going higher.

100,000 troops may sound like a large number to be amassing on the border, but some military strategists point out that it is not enough to invade, conquer and occupy a country the size of the Ukraine.

It would be possible if the population being invaded was sympathetic to the cause, though the dissemination of pro-Russian material has been interrupted. Strategists point to this being one of the objectives of the rhetoric coming from Western nations.

Aside from any human cost of life, the economic cost of a war in the region will be detrimental to all sides involved. It is being reported that US intelligence agencies are of the belief that there are plans to send another 75,000 troops.

It remains to be seen if the situation will deteriorate further.

If tensions continue to escalate, this could be supportive of further advances for the yellow metal.

Gold rejected a move below an ascending trend line and resumed trading above all short, medium and long-term simple moving averages (SMA).

The press lower held above the previous low of 1778.50 to make a low of 1780.36 and these levels may continue to provide support.

With the 10-day SMA crossing the 21-day SMA, conditions have been met for a bullish TMA. Using any 3 SMAs on the chart, the requirements for a TMA will be fulfilled. It should be noted though that past performance is not indicative of future results.

Resistance could be at the November peak of 1877.15. Trading above that level will be the highest since June last year. 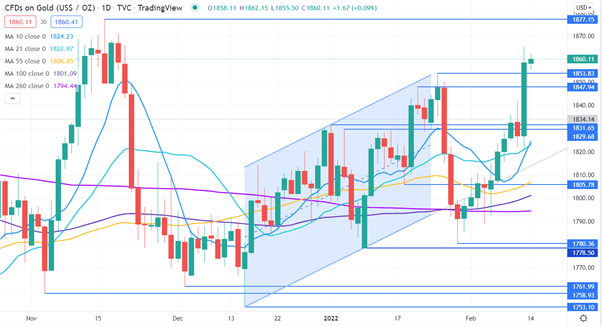