Gold Prices Hit by Rising US Yields Lifting the US Dollar. Will XAU/USD Go Lower?

Gold has been crushed in the last few sessions as the US Dollar has strengthened across the board after US President Joe Biden re-nominated Jerome Powell to Chair the Federal Reserve Bank. This saw US Treasury yields soar, sending the US Dollar index (DXY) to 16-month highs.

Although Mr Powell was the favourite for another term nomination, his alternative, Lael Brainard, was seen by the market as more dovish. With uncertainty around leadership at the Fed all but resolved, the focus returned to the pace of reducing monetary policy stimulus.

While demand for US Dollars has driven gold lower, inflation and real yields appear to have also played a role.

At a time when nominal yields are rising, break-even inflation rates are falling. This is particularly so in the back end of the curve. 30-year market priced inflation has moved from 2.44% to as low as 2.37% in the aftermath of Powell’s re-nomination.

For now, the outlook for gold appears to be beholden to US Dollar direction. USD appears to at the whim of US yields, which are being determined by the markets’ perception of the timeline of the Fed’s stimulus reduction.

Going into the Thanksgiving holiday, we may not get much guidance from Fed speakers until after the break.

The broad range of 1676.91 – 1916.53, in play since earlier in the year, might provide support and resistance respectively. Gold has recently mean reverted to the middle of this wide range.

While it broke down through the 10 and 21-day short-term simple moving averages (SMA), it appears to have stalled as it approached the 55, 100 and 200-day medium and longer-term SMAs. A conclusive move below these SMAs might see bearish momentum unfold. 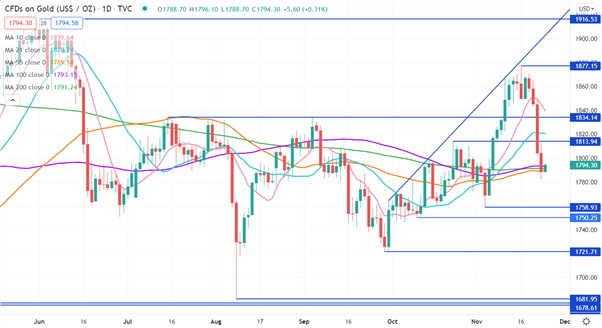