Powell versus Brainard: Next Fed Chair Pros and Cons

Early last week, US President Joe Biden suggested that he would announce his nomination for the next Fed Chair with “four days.” While that timeline was soon pushed back to “around Thanksgiving,” the fact of the matter is that we’re right within the window when a Fed Chair announcement is anticipated.

Per a law passed in 1977, the US president has to elect an individual to serve a four-year term as chair (then called “chairman”) as well as two others to serve as vice chairs (then called “vice chairman”). While these individuals may already be members of the Federal Reserve Board of Governors in the midst of 14-year terms, they would require another confirmation by the US Senate before ascending to their new roles.

Thus, there is a political dimension to the nomination process; one that is particularly acute right now with a 50-50 split in the US Senate between Democrats and Republicans.

What Do Betting Markets Say?

The betting favorite remains current Fed Chair Jerome Powell. The 68-year old has served in his current role since February 2018, when he replaced the retiring Janet Yellen, who later became the current Secretary of Treasury in the Biden administration. Under Powell’s watch, we’ve witnessed one of the fastest labor market recoveries post-recession in US economic history and US equity markets are holding near all-time highs.

PredictIt Odds for Next Fed Chair 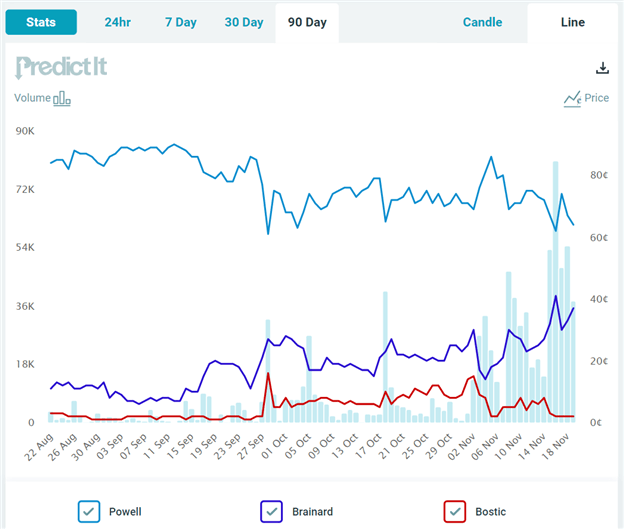 Nevertheless, betting markets are becoming less certain that Powell will hold onto his job as Fed Chair amid a surge in US inflation rates to their highest level in 30-years. Indeed, 59-year old Fed Governor Lael Brainard has been gaining ground in estimates of who will be the next Fed Chair over the past week.

Financial media reports awash in palace intrigue suggest that members of Biden’s Democratic Party are none too fond of Powell, a Republican appointed to the Fed Board of Governors by former US President Barack Obama, who was later elevated to the role of Fed Chair by former US President Donald Trump. Several Democratic Senators believe that Powell has been too relaxed towards bank regulations and hasn’t been paying enough attention to climate change as a significant economic and financial risk.

These concerns have opened the door for Brainard, a Democrat, to have an outside, yet serious, chance at becoming only the second female Fed Chair in US history. Brainard is a Harvard-educated economist, having served on the Fed Board of Governors since 2014. Previously, she was an economic advisor for international affairs during the Bill Clinton administration, as well as an undersecretary for the treasury for international affairs during the Obama administration.

On one hand, reappointing Powell would signal continuity for the Fed at a time facing communications challenges as it navigates the post-pandemic landscape, trying to balance its dual mandate of maximizing employment while keeping inflation close to +2% over the medium-term. A Powell reappointment may also be easier to come by, having already achieved Senate confirmation in February 2018 with a resounding 84-13 vote – most of whom were Republican Senators.

On the other hand, promoting Brainard to the role of Fed Chair may be a signal to market participants that the Biden administration is less concerned with inflation and more concerned with labor markets and climate change (even though the latter is not one of the Fed’s mandates). She may also bring greater attention to cryptocurrency markets, having discussed the merits of central bank digital currencies (CBDC) over the past year; Powell is rather undecided on the matter.

Who Will Be Appointed, and How Will Markets React?

The fact of the matter is that the nomination of Fed Chair is a political exercise. And while it may make sense to have an economist (Brainard) in the role as opposed to a lawyer (Powell), it doesn’t appear likely that Brainard will be able to garner enough support from the Republican Senate caucus in order to clear the confirmation threshold to become the next Fed Chair.

However, having already secured her spot as a member on the Fed Board of Governors, US President Biden may opt to elevate her to the role of Fed Vice Chair, an open seat now that Randy Quarles’ term as Vice Chair of Supervision ended in October. A compromise in which Powell is reappointed as Fed Chair and Brainard to Vice Chair may garner the most widespread support in the evenly-divided US Senate.

Regardless, financial markets are not likely to react too significantly when either Powell or Brainard is announced as the next nominee for Fed Chair. There has been little daylight between the two policy officials in recent months, with both downplaying the inflation surge as a transitory issue resulting from the chaotic reopening of global markets in the midst of the pandemic.

It seems unlikely that there will be a significant, lasting move in US equities, the US Dollar (via the DXY Index), gold prices, or Bitcoin no matter who is chosen to lead the Federal Reserve for the next four years.