Brexit and the Pound

Implied volatility in the British Pound may rise throughout the week as EU and UK policymakers buckle down to finally hammer out a Brexit deal before mid-November. While the initial timeline was set for a month earlier, friction over fisheries has remained a key sticking point. Amid the delays, UK Prime Minister Boris Johnson has warned that businesses should start to prepare for a no-deal outcome.

The issue over fisheries from the UK perspective stands on the same ideological pillars that underwrote the Brexit movement: notions of reclaiming of sovereignty – hence the phrase “take back control”. In this light, it is perhaps not surprising that this issue is so sensitive, and this is amplified by the economically-strategic value it adds to whomever holds the rights over it.

On Friday, France reportedly said it was preparing to compromise on this issue which it had previously taken a hard stance against. This comes as UK Trade Secretary Liz Truss said that both the EU and UK are “making good progress on the negotiations”. Positive developments like these could push the British Pound higher, though given the volatility of the situation, a hiccup in talks could easily reverse those gains.

EUR/GBP price action towards the end of last week is indicative of how domestic political volatility in the UK can derail what appeared to be a clear technical pattern. The pair was being guided lower by steep, descending resistance before breaking out on October 20, aggressively retreating the following day, and two days later blasting through it again. 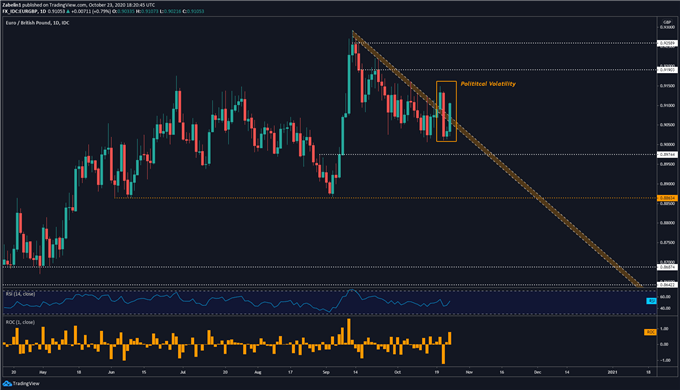 Looking ahead, if the downtrend is indeed invalidated, the next area EUR/GBP will likely have to clear is a shelf at 0.9190. Clearing that layer could open the door to the March swing-high at 0.9258. Having said that, capitulation at 0.9190 could indicate a lack of underlying confidence in the pair’s short-term outlook. It is likely that its retreat would coincide with a lack of progress in Brexit negotiations.

This week, the new Japanese Prime Minister Yoshihide Suga who replaced Shinzo Abe, will be making his first policy speech in the role. This event under normal circumstances would be something noteworthy to watch, but the importance of it is now amplified by virtue of the coronavirus pandemic. One main topic will be climate change with a focus on cutting Japan’s greenhouse gas emissions to net zero by 2050.

In terms of stimulus, Nikkei news reported that the new PM may attempt to introduce and implement stimulus as early as November. The country has already introduced a $2.2 trillion fiscal stimulus bill, many provisions reflecting similar measures taken by other states like loans to small businesses and cash payments. A robust and generous plan could push local equities higher but pressure the anti-risk Japanese Yen.

China Plenum Begins – Why Does it Matter?

China’s Communist Party will be meeting from October 26-29 in Beijing to discuss and plan for the installment of the 14th 5-year plan for the period of 2021-2025. With mounting tension between China and the West – particularly the US – the Asian giant may start to focus on its so-called dual circulation policy. This entails strengthening its domestic economic vitality and shifting away from foreign independence.

Beijing has been facing growing pressure as a result of its policies in the South China Sea, Hong Kong and controversy in the Xinjiang region that has drawn international scrutiny and condemnation. This shift inward is also amplified by comments like President Donald Trump who talked about decoupling from China as tensions between the two grow amid trade war uncertainty and the novel Covid-19 pandemic.

This policy shift accelerated following the Trump administration’s efforts to curtail China’s importation and use of US-based chipmaking technologies. As I wrote in another piece: “Washington has even gone so far as to ban all chip suppliers from selling their goods to Asian tech giants like Huawei if the hardware being sold uses American equipment…This has pushed Beijing to start rapidly developing its own chipmaking industry.”

Recommended by Dimitri Zabelin
What does it take to trade around data?
Get My Guide

Looking ahead, greater separation of China from the world would likely mean a proverbial musical chairs of supply chains as each one attempts to optimally position themselves in a constantly-shifting global order. The main takeaway is the uncertainty of the situation and the impact it may have on China and neighbors that rely on its economic performance – like Australia.

The World Trade Organization (WTO) is expected to formally award the European Union the right to impose $4 billion in retaliatory tariffs against the US’s subsidies to aeronautical giant Boeing. The EU intends to notify the Dispute Settlement Body (DSB) of its intent to exercise its right to these tariffs at the next meeting on October 26. This is comes in response to the US using tariffs against the EU for their subsidies to Airbus.

The White House has warned that it will hit back if the bloc imposes these tariffs, particularly since it comes during a politically-delicate time in an election where Mr. Trump is lagging in the polls. Escalation in this area could compound risk aversion caused by delayed fiscal stimulus talks, potentially setting EUR/USD up for a pullback.

EUR/USD may retest the multi-year swing-high range between 1.1936 and 1.1965 in the coming week. If resistance is cleared, it could market the start of a trend-defining change. If the underlying narrative shifts adequately enough, bullish sentiment may swell and amplify the pair’s gains following its ascent in June and subsequent period of congestion and decline. 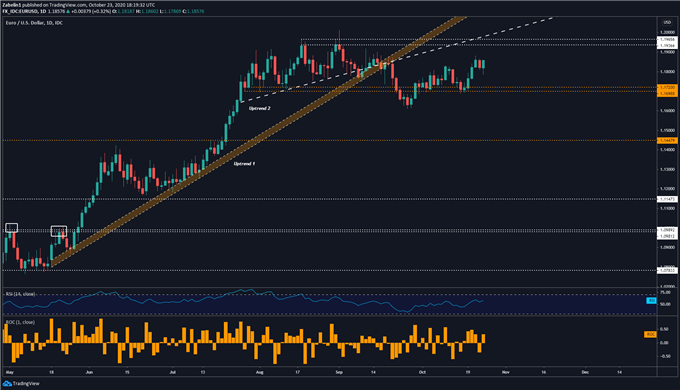