Ongoing Brexit deliberations ahead of key meetings in the fall may aggravate selling pressure in the politically-sensitive British Pound. The transition period ends on December 31, and with no progress in sight, anxiety about the consequences of a no-deal Brexit may start feeding fears about an exacerbated downturn amid the coronavirus pandemic.

European and UK carmakers collectively have called for officials to reach a compromise or else the car sector as a whole would lose over 110 billion euros in lost trade over a half-decade. A no-deal Brexit would mean expensive tariffs would be imposed on imported vehicles. European and UK auto associations warned that the 10% tariffs for cars and up to 22% for trucks would “almost certainly” be passed onto consumers.

In normal times, this would already be a difficult economic reality to adjust to, but in the current fundamental environment, the negative impact would likely be compounded. Numerous by-products of this nature resulting from a no-deal Brexit would likely prolong the economic recovery both in the European Union and United Kingdom.

Tension between the two escalated after UK officials put forward a bill to revise parts of the Withdrawal Agreement they signed in January. The latest amendment has to do with the Northern Ireland Protocol which prevents a hard border between Northern Ireland, a part of the UK, and the Republic of Ireland, an EU member state. Re-ignited tension here could cast a bearish shadow over the British Pound.

After breaking below the late-June uptrend, GBP/JPY plummeted almost three percent in a matter of days but stopped just short of an inflection point at 135.718. The hesitancy to continue lower underscores the technical significance of this particular price level. Therefore, how GBP/JPY interacts with this support may be critical in assessing the pair’s trajectory. 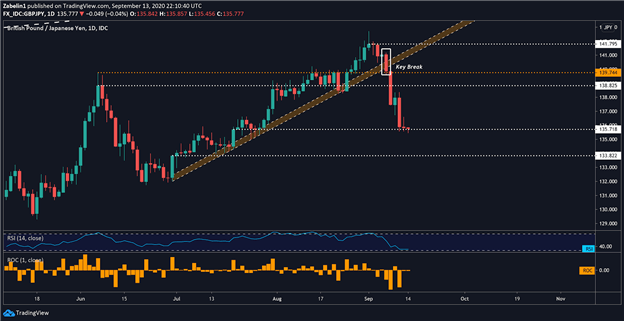 Cracking that floor could open the door to the basement at 133.822, and that possibility alone may inflate what could be at that point swelling selling pressure. Conversely, if support at 135.718 holds, the pair may modestly attempt to eventually retest former support-turned-resistance at 138.825.

As outlined in my prior piece, tension between the US and China continues to grow especially in light of the upcoming September 15 deadline involving the sale of TikTok to a US-based firm. Technology stocks over the past few days have pulled back from their all-time highs following what looked like a stimulus-driven sugar rush that resulted in a V-shaped recovery for the sector from March lows.

Having said that, if the technological rift between the US and China widens - especially leading up to the election - the sector as a whole may pull back. Reorganization of global supply chains - like China boosting its own domestic chip manufacturing - may have a multi-iterated ripple effect across the global economy.

The uncertainty embedded in the implications of what that means for companies in this specific area could have a temporary chilling effect across the sector. Having said that, rising coronavirus cases and the partial resumption of re-imposition of lockdowns - like in the UK and Australia - may help offset the losses if consumers start to put a premium on digital services again.

Since topping in early-September, the Nasdaq index has plunged almost 10 percent. The tech benchmark’s descent accelerated after it broke below an uptrend that formed at the March lows following the Covid-inspired global selloff in equity markets. At the time of writing, the Nasdaq’s drop has encountered some friction at support at 10811.4. 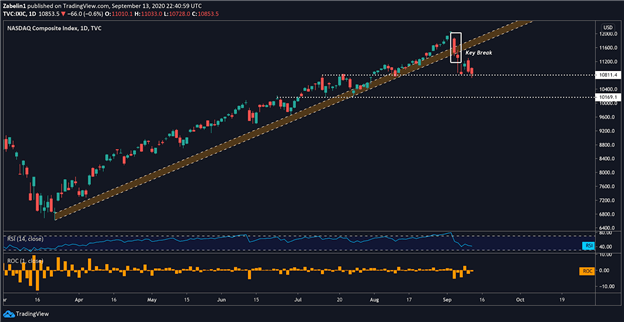 If that floor is punctured with follow-through, the next support level to be challenged may be an inflection point at 10169.1. If that holds, then a bounceback may ensue, though its recovery may be capped at 10811.4. On the other hand, breaking below 10169.1 could inspire additional sellers to enter the market, potentially accentuating selling pressure.