51 DAYS UNTIL THE US PRESIDENTIAL ELECTION

While former Vice President and Democratic nominee Joe Biden continues to lead in the polls vs President Donald Trump, the spread in recent days has somewhat narrowed. For the general election, according to polls conducted by Fox News, Biden’s spread over Trump is 5 points, a little under his roughly 7 to 8 point lead that he’s typically held for the past few weeks. 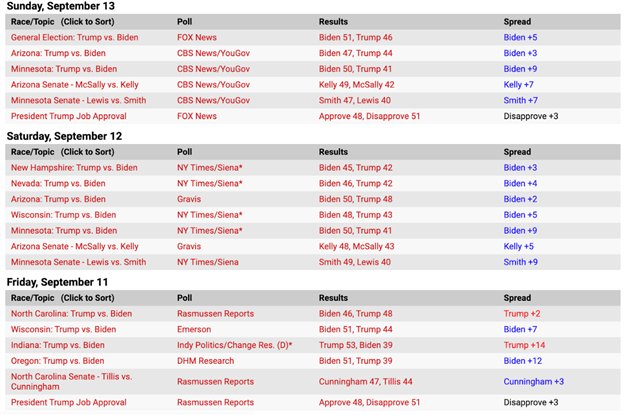 According to polling data from The New York Times taken between September 8-11, Joe Biden is leading Trump in Minnesota, Nevada, New Hampshire and Wisconsin. His performance in these key states is significantly better than former Secretary of State Hillary Clinton’s when she ran as the Democratic nominee in 2016. 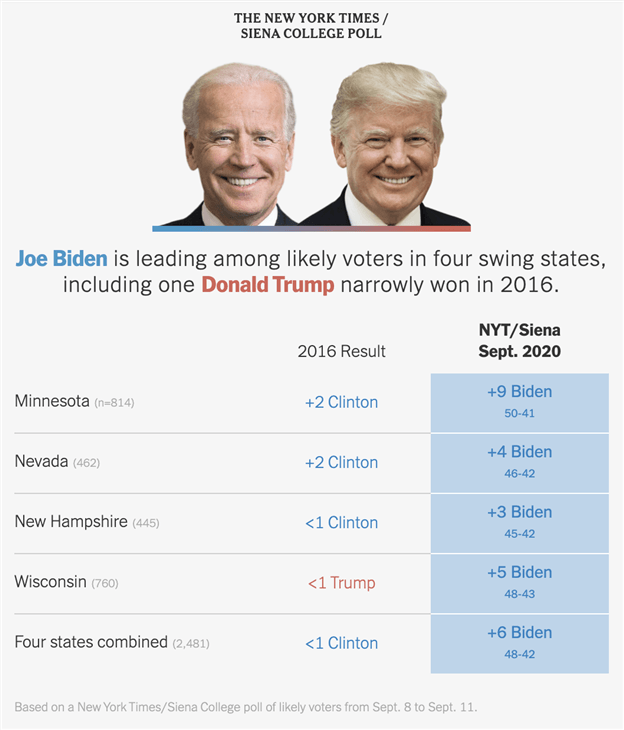 Having said that, as we saw in 2016, polling data can be fickle and at times misleading if too much of a premium is put on their ability to predict the outcome of an election. Political statistics will be particularly important to monitor - and may then start having a more tangible impact on markets - leading up to and following the first presidential debate on September 29.

US-China Technology Tension Another Election Risk to Contend With

Trump has given ByteDance, the parent company of TikTok, until September 15 to agree to a sale of the popular social media app to a US-based company. Some of the firms interested in acquiring it are Microsoft and Oracle. However, sources closer to the matter have indicated that Beijing is against the transaction, saying that they would rather shut it down in the US than sell it.

Washington’s pressure on China is both a feature of the Trump administration’s relatively hawkish foreign policy approach and a campaign tactic. According to the Pew Research Center, anti-China sentiment has surged following the Covid-19 outbreak, and the Trump administration’s bolder stance may be an effort to capitalize on the growing resentment. 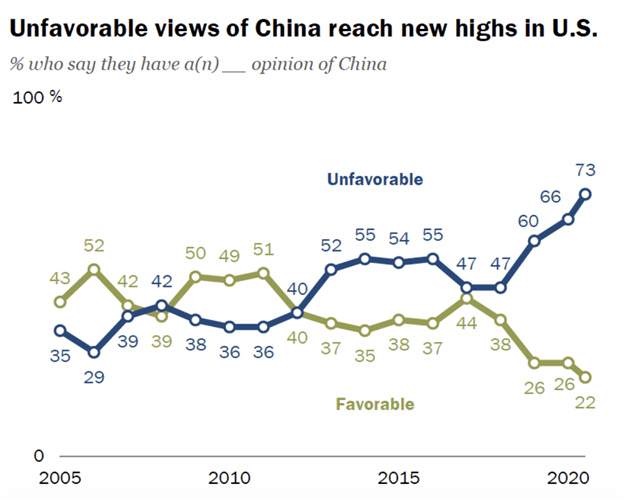 From a market-oriented perspective, additional geopolitical pressure - especially on the technology sector which has blossomed amid the pandemic - could ignite notable volatility. The recent pullback in the Nasdaq index may be exacerbated if bilateral tensions between the US and China over tech continue to grow and subsequently impact economic policy.

EUR/USD is trading at the intersection of the late-July uptrend and an older slope of appreciation dating back to March. These are labelled “Uptrend 2” and “Uptrend 1”, respectively. After breaking the former, it bounced after retesting the latter. How EUR/USD continues to trade from here may be critical in determining the trajectory.

If the pair manages to hold above Uptrend 2, a rebound may bring another ascent toward resistance at 1.2014. Conversely, a breakdown of bullish sentiment could see the pair break both uptrends, but selling pressure may hit a wall at a compact but fortified support zone between 1.1720 and 1.1698.