The haven-linked US Dollar generally traded lower against ASEAN currencies this past week as the Singapore Dollar, and Philippine Peso gained ground. The Malaysian Ringgit was little changed as well as the Indian Rupee. Global market sentiment improved, although seemingly at an increasingly slower pace. The S&P 500 struggled to maintain a push into all-time high territory, rising 0.68%.

Recommended by Daniel Dubrovsky
What is the road ahead for USD this quarter?
Get My Guide

A notable standout this past week was the Indonesian Rupiah, which weakened 1.16% against the US Dollar. Currencies from emerging markets can be sensitive to capital flows. Last week, Indonesia saw an overall US$43 million outflow in foreign portfolio investment. This is compared to +US$61.4 million in the Philippines where USD/PHP declined -0.59%.

Even though IDR depreciated, it could have been worse. The Bank of Indonesia, which has often expressed its concern about a weak currency this year, directly intervened in the FX spot interbank market. This also follows recent dismal Indonesian growth data. In the second quarter, GDP clocked in at -5.3% y/y versus -4.7% anticipated. 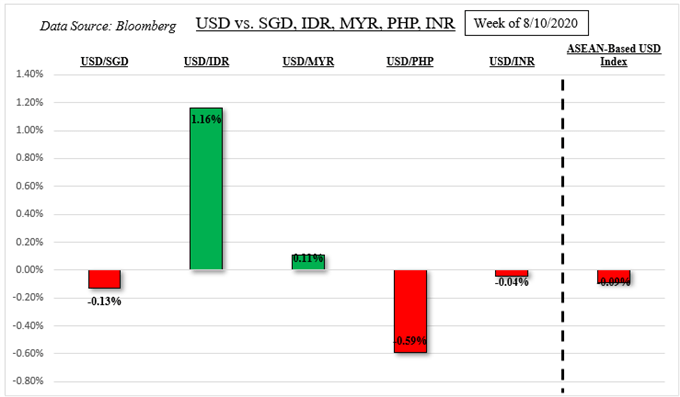 Ahead, USD/SGD, USD/IDR, USD/PHP and USD/MYR will likely remain sensitive to market mood and thus external developments. In this regard, there is one less event to keep tabs on. The United States and China were originally scheduled to conduct a review of the phase-one trade deal 6 months after it was initiated. However, this event appears to have been postponed indefinitely, according to media reports citing unnames sources.

Meanwhile the US Senate has adjourned for a recess until September even though members were unable to come to terms on a second fiscal stimulus package. What may be keeping market mood from deteriorating is an executive order from the White House to continue certain provisions of the initial package. With that in mind, all eyes turn to FOMC minutes on Wednesday as a potential catalyst for market volatility.

The economic calendar docket for the ASEAN region is relatively busier. On Wednesday, USD/IDR will be closely eyeing the Bank of Indonesia monetary policy announcement. Benchmark lending rates are anticipated to be left unchanged. But, the central bank could reiterate its commitment to stabilize its currency. Tough language pledging to uphold IDR could send the Rupiah flying and ought to be kept in mind after recent weakness.

Then on Friday USD/PHP will be turning towards the Philippine Central Bank (BSP). Like with the Bank of Indonesia, the BSP is not anticipated to adjust its benchmark lending rate. Aside from capital inflows, what may be keeping the Philippine Peso elevated is confidence from the BSP about the economic outlook. Governor Benjamin Diokno noted earlier this month that a strong 2021 rebound in GDP is expected.

At the end of last week, the 20-day rolling correlation coefficient between my ASEAN-based US Dollar index and the MSCI Emerging Markets Index, excluding China, (EMXC) stood at -0.83. This is slightly down from -0.87 in the preceding week. Values closer to -1 indicate an increasingly inverse relationship, though it is important to recognize that correlation does not imply causation. 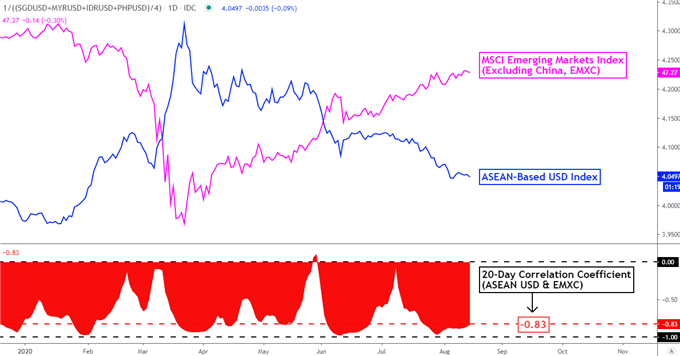