Renewed US-Iran tensions may boost Brent crude oil prices if strained bilateral relations stir concerns of politically-induced supply disruptions. The U.N. Security Council is currently preparing to vote on a US-led initiative this week to extend the arms embargo against Iran. In the 2015 nuclear deal, members agreed to suspend the country’s right to freely purchase and sell military hardware until October of this year.

However, the new proposal by Washington seeks to extend this ban indefinitely or “until the Security Council decides otherwise”. The proposal has been met with opposition by China and Russia who hold veto power on the 15-member council. Resistance to join the venture with Washington may further widen the rift between the US and China, who are already at odds over trade and Beijing’s policy toward Hong Kong.

With cross-Pacific trade negotiations only a few days away, a lack of support for Washington’s initiative may spill over into these talks and could add yet another layer of disagreement, among a slew of others Iranian President Hassan Rouhani warned that the “initiators” of the arms embargo will “be responsible for the consequences”, leaving blank what exactly those might be.

An oil-positive, risk-off dynamic from international entanglements between Tehran and Washington is not unfamiliar to investors. Throughout 2018 and most of 2019, crude oil prices spiked on several such occasions, ranging from drone strikes to clashes with oil tankers in the Strait of Hormuz. In early 2020, the killing of Iranian General Qassem Soleimani led to fears of a full-blown military confrontation. 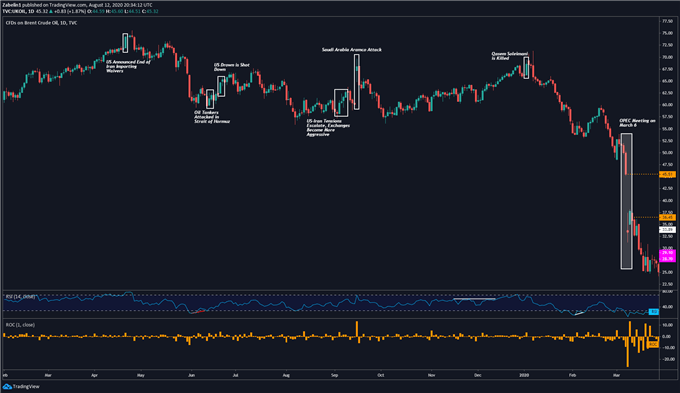 With the 2020 election coming up, US President Donald Trump may take a more aggressive approach against Iran in an effort to score political points compensating for the economic impact of the coronavirus pandemic. A foreign policy win in this area may add a feather to Mr. Trump’s cap if he is able to impose sanctions or similar measures against Iran without having shots fired against the US or its allies.

The most important takeaway from the chart above oil’s persistent downtrend despite heightened geopolitical tensions. As a growth-anchored commodity, it is ultimately guided by the macro fundamental outlook. In 2018 and 2019, weaker economic activity from a multitude of US-based trade spats undermined global growth prospects and demand for key energy inputs, including crude.

Therefore, while US-Iran tensions may cause Brent to experience bouts of volatility, the ultimate trajectory for crude oil is dictated by the business cycle. Almost every country on earth will experience an economic contraction as a result of Covid-19. Consequently, unless data points to economic stabilization, crude oil gains will likely continue to be capped by the demand for it – or rather there lack of.

Crude oil prices are approaching a critical juncture between the early-June uptrend and the pre-OPEC drop in early March. Puncturing the latter with follow-through could mark a trend-defining change and may pave the way for additional gains. Conversely, invalidating support – labelled as “uptrend 2” – could invite a notable decline. In this scenario, selling pressure may start abating around 41.35. 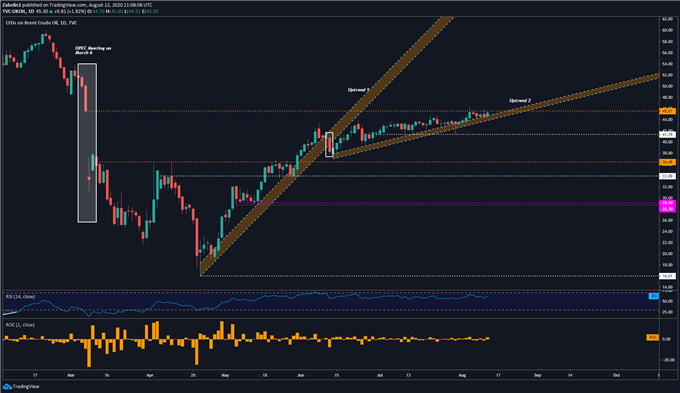