Technically speaking, a recession, by definition, is two consecutive quarters of contracting growth readings. To this end, if the US economy saw a steep plunge in Q2’20 but then even a meager rebound to growth in Q3’20, the technical definition of a recession would not be met. This is, of course, ridiculous: we’ve just seen the sharpest dropoff in US economic activity in history.

Technical definition met or not, it’s fair to say that the economy is enduring recessionary conditions at present time. The real question is, how is the US economy recovering? And while the shape of the recovery won’t truly be known until the Q3’20 US GDP figures, we will be hearing about the alphabet soup of recession recovery shapes throughout this week, and over the next several months.

The pace at which the economy recovers determines the shape of the recession recovery. When we talk about ‘shapes of the recovery,’ we are talking about how the charts look: GDP plotted against time will produce a shape that resembles a letter in the alphabet: V, U, W, J, and L. 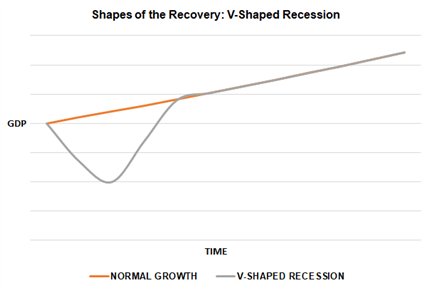 Shapes of the Recovery: V-Shaped Recession

A V-shaped recession implies a steep drop in growth followed by a sharp recovery over the same period of time; if the dropoff in growth occurs over two quarters, the rebound in growth should take place in two quarters thereafter. V-shaped recoveries typically occur when business and consumers have the ability to return to their pre-recession economic habits as soon as possible. This would be the best case scenario for any economy emerging from a recession. Which, given the context of the data we’ve seen, seems highly unlikely for the US economy at present time: we would need to be back to normal trend by early-2021. 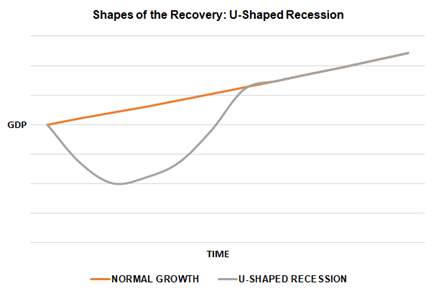 Shapes of the Recovery: U-Shaped Recession

A U-shaped recession implies a steep drop in growth followed by no immediate rebound, then a sharp recovery back to the normal growth trend thereafter. If the dropoff in growth occurs over two quarters, the period of stagnation could last from four to eight quarters (1-2 years), before a sharp, accelerated rebound in growth occuring thereafter. U-shaped recoveries tend to see extended periods of high unemployment and low inflation. According to a poll conducted by Reuters in April 2020, over 55% of CEOs globally believed that the global economy would ensure a U-shaped recession, meaning the recovery will drag into at least 2022. 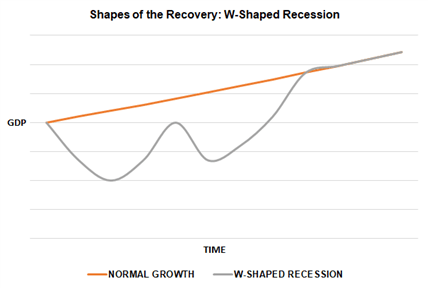 Shapes of the Recovery: W-Shaped Recession

A W-shaped recession implies a steep drop in growth followed by an initial immediate rebound, which is a false start: there is a second, sharp decline back to the lows, before recovery finally ensues. This is perhaps the most frustrating and difficult type of economic environment in which traders can operate, as the false start of the recovery can goad policymakers and market participants into changing their outlooks and positioning far too early: central banks tighten interest rates too early, snuffing out growth. W-shaped recessions typically go on for a number of years after an initial steep drop. This would imply no return to normal trend for several years. 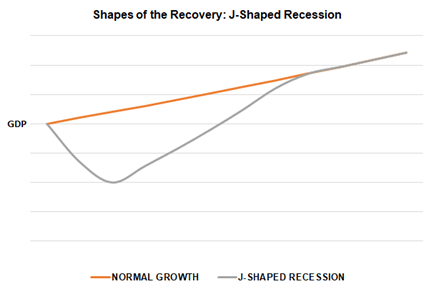 A J-shaped recession implies a steep drop in growth followed by a slow rebound over a long period of time; if the dropoff in growth occurs over two quarters, the rebound in growth usually takes place over several years thereafter. This means that the economy would see a slow but steady return back to pre-coronavirus pandemic output, but certaintly not immediately. This appears to be the base case scenario for the US economy at present time. 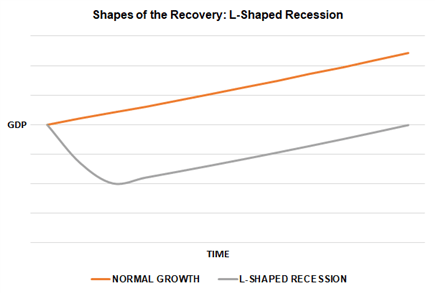 Shapes of the Recovery: L-Shaped Recession

An L-shaped recession implies a steep drop in growth followed by no recovery. Consumers and businesses are irreperably harmed, and the economy enters into a ‘new normal’ of lower output for a number of years. This is also known as ‘the hockey stick pattern.’ The Great Depression is an example of an L-shaped recession (a depression is a severe, prolonged recession). High unemployment reigns while bankruptices and insolvenices are persistent. This would be the worst case scenario for any economy emerging from a recession.