US Recession Watch, July 2020 - Shapes of the Recovery: J-Curve

US Economy Stares into the Abyss

The US economy remains in rough shape. We are facing the worst economic crisis in US history – and the numbers bear this out. We’ve never seen the unemployment rate fall this far, or this many millions of people without work, in such a short period of time. Continuing unemployment claims show about 16 million people are still the rolls in the US, but looking at total claims, including special assistance given due to the pandemic, it’s closer to 30 million jobless seeking unemployment assistance.

Among other things, a sustained bout of high unemployment poses a real problem due to velocity of money, or the rate at which money changes hands in the economy. When an economy is growing, citizens are spending more money and there’s inflationary pressure, money tends to change hands quicker and velocity of money rises.Conversely, when an economy begins to struggle, we tend to see disposable income fall with people saving more and slowing down their spending, resulting in money changing hands at a lower rate - velocity of money falling.

What concerns economists is that if velocity of money falls and stays low for too long, that’s when we’ll begin to see the second order effect of the economic fallout. That’s where bankruptcies start to rise because businesses are deprived of the cash flow they need to meet their overheads.

Sure enough, one of the alarming things that happened later last month is the news that insolvencies filings each week for the past six weeks have been near their highest levels since May 2009. All of these facts are going to encumber a recovery. The longer that the US goes through a lockdown and the longer the economy is in a statis where it’s not fully open, velocity of money is going to dip and we’re going to see more businesses going bankrupt.

Thanks to how GDP is calculated (the first month of the quarter has five times the weight as the third month), the economic brunt of the coronavirus pandemic, levied ignificantly in April and then trailing off in May, will show up in the form of a significantly depressed growth reading. The initial reopening phase in June will barely be felt in the data. The Atlanta Fed GDPNow growth tracker for Q2’20 US GDP at times has flirted with a contraction in the neighborhood of -50%. 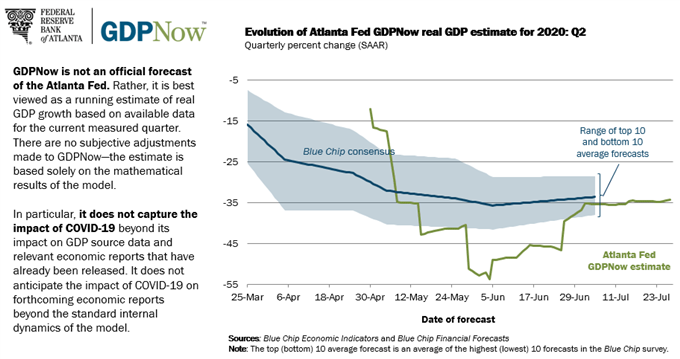 Even after the reopening in June, the unfortunate reality is that the Atlanta Fed GDPNow Q2’20 growth forecast remains depressing at best, despite US economic data momentum (more on that below) rising to strongest level ever (relative to expectations): the liftoff in June raised the Q2’20 growth forecast from -54.3 to -34.3%. Yet take note of the Q2’20 growth tracker in recent weeks: it has been flatlining around -35%; there are signs that the economy has stalled.

Initial jobless claims have topped 1 million for 18 straight weeks, and last week snapped a 15-week streak where claims were falling. Durable goods orders for June were softer than anticipated, and the preliminary July US Markit PMI Composite came in right at 50.0 – showing an economy neither growing nor contracting.

Heading Over the Fiscal Cliff

It’s going to be difficult for the economy to recover and while Q2 is going to be very bad, with potentially a -35% annualized GDP rate, the hope is that Q3 will be much better. But Q3 has its own problems coming down the pipeline.

On July 15th taxes were due in the US, and that was a big cash outflow for many of Americans.Also, at the end of July we see the evictions suspension and mortgage payments suspension in a lot of the states that initially had the coronavirus are coming to an end, and if you’ve been without work and haven’t been paying your rent, you’ve got to start paying your rent again, and that’ll be problematic for millions.

At the federal level, unemployment benefits have expired. So Americans are about to see a significant loss in income potential and therefore spending potential. This knocks both the ‘C’ and the ‘G’ parts of the GDP equation [C+G+I+(EX-IM)]; the drag on growth is a double-tap. 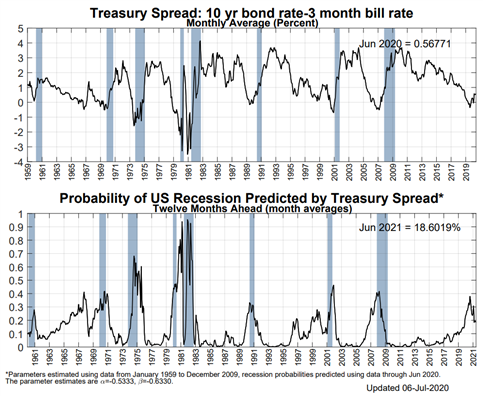 It still holds that, due to the Fed’s extraordinary efforts to flood the market with liquidity, US recession odds remain artificially low as measured by the relationship among US Treasury spreads. These efforts by the Fed have allowed the US yield curve to normalize, removing the inverted kink that would otherwise suggest rising recession odds. To this end, there is currently an 18.6% chance of a US recession in the next 12-months, per the NY Fed Recession Probability Indicator; a likelihood we deem to be far, far too low given the abysmmal readings set forth by the Atlanta Fed GDPNow Q2’20 growth tracker.

Technically speaking, however, a recession, by definition, is two consecutive quarters of contracting growth readings. To this end, if the US economy saw a steep plunge in Q2’20 but then even a meager rebound to growth in Q3’20, the technical definition of a recession would not be met. The pace at which the economy recovers determines the shape of the recovery. When we talk about ‘shapes of the recovery,’ we are talking about how the charts look: GDP plotted against time will produce a shape that resembles a letter in the alphabet.

What Shape will the US Recovery Take?

Let’s cut through the noise: recession, depression, or otherwise, the US economy is going to start to grow again, even if it appears to be in fits and starts. The pace at which the economy recovers, however, will very-well determine whether or not we see a recession take root, or worse. Given the data thus far, it appears that a gradual recovery is emerging: not V-shaped, but J-shaped. 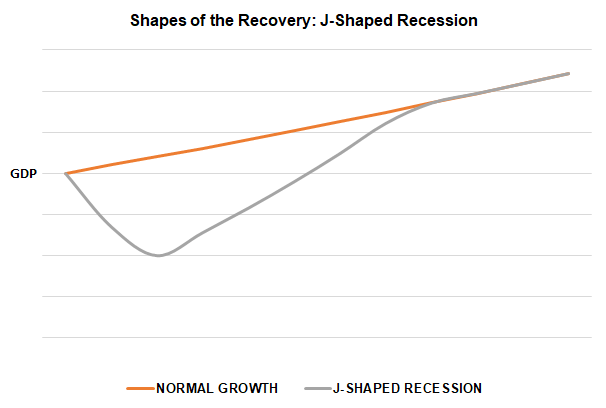 A J-shaped recession implies a steep drop in growth followed by a slow rebound over a long period of time; if the dropoff in growth occurs over two quarters, the rebound in growth usually takes place over several years thereafter. This means that the economy would see a slow but steady return back to pre-coronavirus pandemic output, but certaintly not immediately.