The US Dollar has generally been losing value against its major counterparts as of late, but it has been soaring against the Indian Rupee. At the end of February, USD/INR closed above a key range of resistance before accelerating its uptrend from the middle of January – as expected. A couple of fundamental developments could be traced to the broad weakness in the INR rate.

Most recently, the Reserve Bank of India (RBI) placed Yes Bank – a private lending institution – under a moratorium. The RBI is now limiting withdrawals to 50,000 Rupees ($682) from the lender as it seized and took control over management for the next 30 days “owing to serious deterioration in the financial position of the bank”. This is in an effort to improve the general governance structure in lending institutions.

Recommended by Daniel Dubrovsky
New to forex? Dive into its unique properties
Get My Guide

The vulnerability in India’s troubled banking sector can be traced back to 2016 and is one of the main economic challenges the country is facing. On the chart below, shares in Yes Bank can be seen dropping over 85% since 2018 and has been following a general slowdown in credit growth. All the while, GDP and industrial production have been deteriorating with unemployment and local inflation rising.

These are key ingredients to stagflation, slowing growth accompanied with rising CPI. Earlier this week, RBI Governor Shaktikanta Das hinted at near-term easing to come with inflation expected to moderate. Headline price growth clocked in at 7.59% y/y in January, the fastest pace since 2014. A shortage in onions – a key ingredient in local cuisine - has largely been responsible for the surge in overall prices. 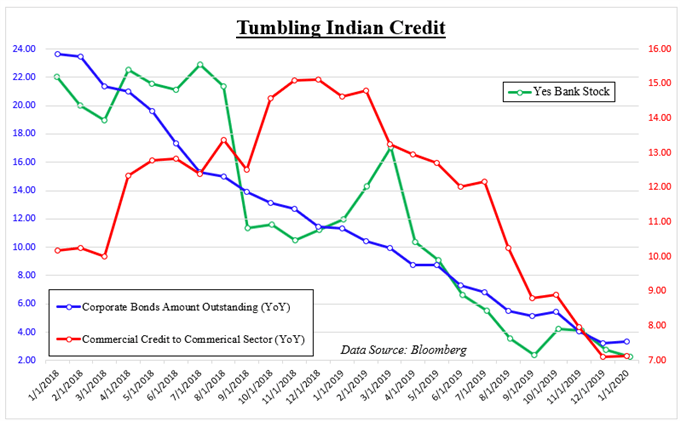 On top of this, the coronavirus outbreak has been complicating efforts from local policymakers to bolster growth and confidence. China is one of India’s top trading partners. Recent measures of business activity from the world’s second-largest economy pointed to the sharpest contraction on record, surpassing 2008 lows. Most virus cases are now emerging outside of China.

India has reported 30 cases of the coronavirus at the time of this writing. The combination of RBI easing prospects, risks to the banking system, stagflation and a slowdown in growth arguably paints a bleak picture for the Indian Rupee. The US Dollar has also failed to materially capitalize on its status as the world’s reserve currency. If selling pressure in equities around the world persists, the USD could yet find upside momentum.

USD/INR is now approaching highs from 2018 which is a psychological barrier between 74.1375 to 74.4849. In the event of a material turn lower, rising support from July could maintain the dominant uptrend – red lines on the chart below. Otherwise, the US Dollar could be on course to set record highs against the Indian Rupee. In such circumstances, keep an eye on the 123.6% Fibonacci extension at 74.4114.