CORONAVIRUS LIKELY TO BE BIGGEST MARKET MOVER THIS WEEK

The coronavirus continues to spread and undermine market mood with the total globally-confirmed cases at 88,437 with more infections popping up outside of mainland China. The number of those infected in Italy jumped from to 1,694 after reporting less than 500 last week with more showing up in the Middle East, Brazil and Northern America.

What concerns policymakers is the cross-continental spread in addition to the CDC reporting its first case in the US with an unknown origin. COVID-19 has hit China particularly hard as seen by last week’s PMI figures, with contaminated areas along the coastal perimeter. It serves as the Asian giant’s gateway to global commerce and epicenter for industrial production.

Looking ahead, if more cases continue to be reported – particularly in Europe – the sentiment-linked Norwegian Krone and Swedish Krona may suffer. The export-oriented, Scandinavian economies strongly rely on robust European demand to fuel their economic vitality. Germany and Italy – the first and third largest Eurozone economies, respectively – are at risk of falling into a recession as their growth sputters.

Throughout the week, markets will be lavished with a cascade of cross-continental PMI out of both developed and frontier economies. If the statistics echo a similar, gloomy outlook Chinese PMI gave, the growth-oriented SEK and NOK may suffer. Silver prices may also decline if aggressive risk aversion ensues and market demand for liquidity spikes and lessens the appeal of precious metals vs more highly-liquid assets like USD. 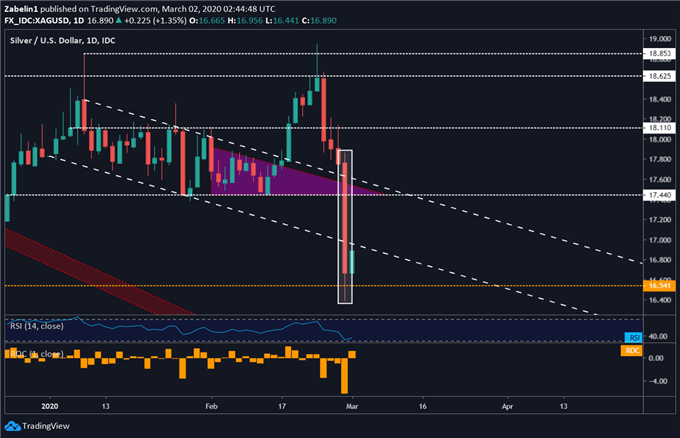 OPEC VIENNA: HOW WILL IT IMPACT BRENT, NOK?

The Organization for Petroleum Exporting Countries (OPEC) a group of major non-cartel energy producers (known collectively as 'OPEC+') will be meeting this week in Vienna to discuss the outlook for oil in light of the coronavirus. Saudi Arabia – the largest supplier – is expected to push for further cuts to production in an effort to boost crude oil prices as the Brent price benchmark trases at multi-year lows.

However, in addition to the US being the biggest oil exporter – thereby undermining OPEC’s ability to influence global oil prices – a growing rift in OPEC+ may make coordination more difficult. Russia, the largest player in the non-OPEC member alliance has not made it clear it is on board for additional production cuts. If unity on the outlook and policy going forward is lacking, it could hurt the petroleum-linked Norwegian Krone.

Sweden and Norway will both be releasing a cascade of PMI and industrial data throughout the week which may amplify aversion in the Scandinavian economies against an unfavorable fundamental backdrop. While local data may induce volatility in the Swedish Krona and Norwegian Krone, Nordic FX traders will likely be placing their focus on external factors that frequently impact the outward-facing Scandinavian economies.

On Friday, silver prices suffered their largest one-day decline since November 2016 and is currently trading at December-lows. It also broke below the two-month long downward-sloping channel (white-dotted lines) but may retest the lower tier as it trades below it and support at 16.541. If the former holds, silver prices may continue to face aggressive selling pressure as they approach the August low at 16.177

Despite breaking below the January uptrend (labelled as “A”), USD/NOK continues to rise and is trading above a new upward-sloping support channel dating back to the latter half of January (labelled as “B”). While on a technical level negative RSI divergence shows slowing upside momentum, this does not necessarily mean a turn lower is inevitable. However, if the pair breaks below uptrend B, that may catalyze a short-term bearish correction. However, fundamental catalysts in the week ahead may continue to push USD/NOK higher.