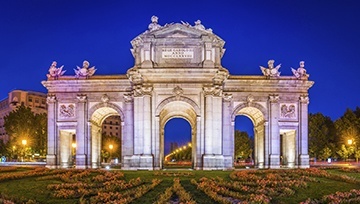 Spanish Elections – How Different Coalitions May Affect the Euro

Spanish Elections have no effect on the Euro so far, as outcome follows expectations, and the need for cross-party talks delay any decisive effect. EURUSD currently trades around post-election levels and is taking its cue more from economic data than politics, although this may change in the coming weeks and months.

Two years after being replaced as leader of the opposition party PSOE, Pedro Sanchez has managed to come back in full by winning the general elections with a comfortable margin, taking almost 29% of the votes. It is no shock to anyone that the Socialist Party has managed to come back on top, as the Centre-right People’s Party (PP) has been suffering a steady decline in the public eye for the past few months, following various corruption scandals and a general discontent regarding their policies.

Unlike with other general elections, Spanish Markets have not seen a big move after Sunday’s vote, as the results were mostly priced, and the worst possible outcomes have been avoided. Saying this, and despite Pedro Sanchez being the clear winner in Sunday’s elections, there is still uncertainty regarding the cross-party help he is going to need if he is to be elected President. The Spanish stock index - Ibex 35 - dropped below the 9400 at midnight on Sunday after the results of the election were announced but regained most of the loss at the open on Monday morning. It is worth mentioning that for the first time in its history, the Ibex 35 closed in positive territory the day after a general election had taken place, closing 0.12% higher on the day.

In an international context, the effect of the Spanish Elections on the Eurozone markets has been minor, as Spain’s fragmented politics are less of a concern to investors than Italy or the European Central Bank’s (ECB) monetary policies. As European Parliament and regional elections are to take place in May, talks to create a governing party could be pushed back, and even though there could be a new round of voting, the effect on the market is expected to be minimal.

Spanish government bond yields remain little changed after the election, with the yield differential between Spanish 10-year bonds and the German 10-year Bund just under the 105 basis points, slightly below the 106 points at the market close last Friday April 26. Spanish 10-year bond yields fell from 1.03% to 1.01% post-elections, which shows that investors welcome the election results as the two most likely coalition outcomes are viewed as the best for the markets. Coalitions that can be formed from the results are the most pro-European that could have taken place, as Euro-sceptic party Vox did not manage to gain as much support as initially forecast, which has put European concerns at ease.

PSOE won 123 seats in Parliament, versus 66 obtained by PP who suffered a big decline from the 135 obtained in the 2016 election. The party veered further to the right under direction of the new leader Pablo Casado, but this proved to be unsuccessful as it lost support from both sides to Liberal party Ciudadanos and far-right party Vox.

The results of the election mean that no right-wing coalition can be created that will achieve enough seats to gain a majority in Parliament, which means that Pedro Sanchez’s PSOE is the only party that can decide the future of Parliament by creating a majority.

The bottom line is that Pedro Sanchez has various options to ensure he is elected as President without needing the support of Catalan Separatists, which has proven to be a big reliefto investors that support the continued unity of Spain.

This possible union would be the one to most accurately represent the ideological profile in which a fragmented Spain currently finds itself in. It is also the option most highly valued by the markets.

And Ciudadanos’ success on Sunday night, which almost overtook PP as the main centre-right party, means that this coalition would be possible as they would amass 180 seats, 4 more than the 176 needed for a majority. But the leader of Ciudadanos Albert Rivera clearly ruled out the possibility during his campaign and seems to have stood by his decision as his relationship with Pedro Sanchez has become very strained, leaving him as a main player in the opposition.

If this coalition were to happen it would be a business-friendly centrist coalition that would have the ability to implement reformative policies that would be accepted by market participants, having a positive effect on the Euro both in the short and long-term.

Some economists believe that the PSOE-Podemos coalition could implement policies that would hinder economic growth, which could lead to uncertainty about a sovereign debt crisis, similar to the one recently experienced in Italy. Despite Spain being in a better economic position than Italy, socialist measures that hinder Spain’s growth could put pressure on the European Union, which is currently experiencing slowing growth itself, and would increase sovereign yields.

This coalition would lead to a left-wing party that would have a negative impact on the Euro on the short run but Sanchez’ track record in the last few months could put market participants at ease in the long run. The difference between the 10-year Spanish bonds and the German Bund could increase to 110-115 basis points if investors believe that Podemos’ populist influence would increase the risk of higher debt within the Spanish economy.

This right-wing coalition amassed 147 seats, which proves insufficient to debunk Pedro Sanchez from the top as they have no other viable allies to join forces with. A right-wing coalition led by PP and Ciudadanos with support from Vox would have a short-term positive effect on the Euro, but if the two centre parties failed to lead the way, their reliance on Euro-sceptic Vox could lead to issues and a drag on the Euro further down the line.

Looking back, Spanish parties have had trouble forming coalitions in the past, which could lead to new elections in the coming months, resembling what happened in the general elections of 2015. Although Pedro Sanchez’ comfortable victory on Sunday makes this outcome less likely, if a second election were to be necessary, the effect on markets is not expected to be significant, as it hardly had an impact when it happened three years ago, or in other economies in the Eurozone that have faced similar situations.