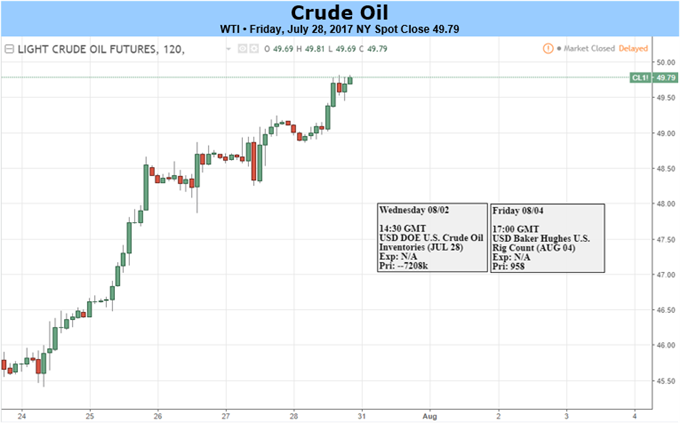 You know how in some weeks, everything goes well? This week was a week like no other for Crude Bulls as trading started with news out of St. Petersburg that OPEC had reached a further agreement to cut exports from Saudi Arabia (the de-facto head of OPEC), the U.A.E. and Kuwait. Saudi also said they would look to ‘forcefully demand participation’ of compliance to the production curb deal that has been extended to March 2018. After briefly punching below Friday’s low on Monday morning, Crude Oil closed the trading day higher consecutively for the rest of the week until settling near $50/bbl. The total gain was nearly 9% on the week and the environment and sentiment picture (more below) seem to point to more gains to come. What a difference a week can make!

On Wednesday, news of falling US inventories that aligned with rising demand as evidenced by a 7.2m bbl inventory draw and a decline against other products such as distillate and gasoline touched an aggregate low not seen since early 2016 and helped to provide evidence that the supply glut is indeed shrinking. On an individual basis, Crude stockpiles fell to the lowest levels since January while the EIA shared that the demand for fuel had rising to the highest June level in a decade.

Two related currency markets worth watching in addition to crude oil is the US Dollar and the Canadian Dollar. The USD, which fell deeper this week to a new 14-month low after the Federal Reserve’s statement when they decided not to hike rates showed a likely preference for fewer rate hikes than previously expected is the pricing currency for Oil. Therefore, a weaker USD may provide a further boon to commodities, Oil included. The Canadian Dollar, which ended the week trading aggressively higher and the strongest relative G10 currency showed the seven straight month of GDP growth may also see marginal gains as Oil, a key export becomes more valuable and adds even more to GDP export value.

Combining the positive fundamental picture above with the chart below, and you may find further reason to anticipate further gains. The price of Crude Oil has recently broken above the top of a falling (bearish) price channel that has framed price action for most of 2017. Therefore, if the fundamental picture of rising demand and a weaker USD holds, we could see a move to the lower-$50s in WTI, and mid-$50s in Brent.

Crude Oil price breaks above strong resistance from confluence of levels at $47.29-$48.20 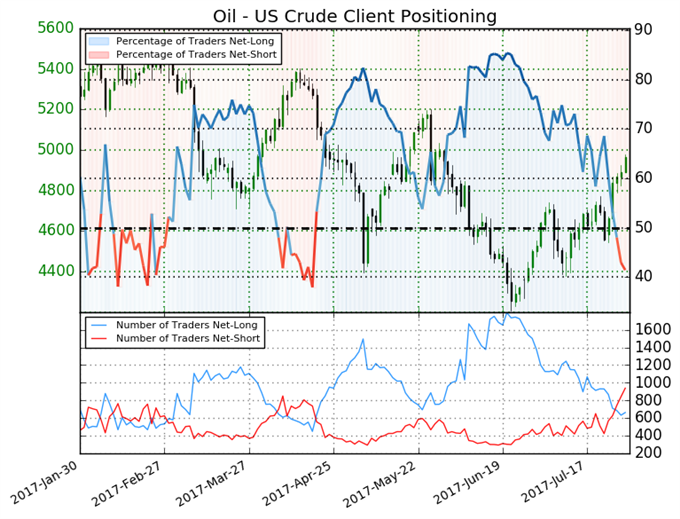 We typically take a contrarian view to crowd sentiment, and the fact traders are net-short suggests Oil - US Crude prices may continue to rise. Traders are further net-short than yesterday and last week, and the combination of current sentiment and recent changes gives us a stronger Oil - US Crude-bullish contrarian trading bias.(Emphasis mine)

The insight derived from this sentiment analysis on Oil is that traders are increasing their short exposure while reducing their long coverage despite recent gains. Taking this into account, the sentiment picture favors further gains.