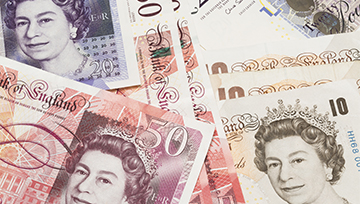 Brexit Briefing: Why Sterling Traders Should Peer Through GDP Gloom

- The figures will give a preliminary snapshot of how the economy performed as a general election was held and the Brexit talks began.

- However, the British Pound is unlikely to be affected strongly one way or the other.

If you’re interested in the long-term outlook for GBP, check out our new Trading Guide:it’s free and has been updated for the third quarter of 2017

Preliminary UK economic growth data, due at 0830 GMT Wednesday, will likely make grim reading. The consensus among economists polled by the news agencies is that GDP expanded by just 0.3% in the second quarter of the year, up from 0.2% in the first quarter but just half the average of the three previous quarters.

The numbers will cover the three months from April to June, including both the UK general election on June 8 and the start of the Brexit talks on June 19, and if the economists are right the year/year growth rate will drop to 1.7% from 2.0%.

They will provide confirmation that the first-quarter slowdown was not just a blip and that the Bank of England’s forecast of 1.9% growth in 2017 as a whole, while still within reach, will be difficult to achieve. Only yesterday the International Monetary Fund cut its forecast to 1.7% from its 2.0% prediction in April.

Listen in to our webinar at 0815 GMT Wednesday, when DailyFX Analyst Nick Cawley will analyze the GDP data live as they are released

However, the British Pound has held its ground against the Euro since trading wound down in Europe on Thursday and has moved ahead against a weakening US Dollar. While it might react negatively to poorer-than-expected figures, they are unlikely to have more than a near-term impact.

Even if the predictions are correct, the figures would be better than many “remainers” were warning they would be if the British voted to leave the EU – and more recent data have been relatively upbeat. For example, the Confederation of British Industry’s Industrial Trends Survey, released today, suggested that the recent weakness in the manufacturing data could soon be reversed and that the improvement could be maintained throughout the third quarter.

According to the CBI, UK manufacturing production grew at the fastest pace since January 1995 in the three months to July, employee headcount increased at the fastest rate for three years and hiring intentions for the coming quarter also improved. Moreover, the CBI said it expected output growth to continue to grow strongly in the quarter ahead and that manufacturers are upbeat about prospects for overall demand. Against this backdrop, investment intentions improved across the board, particularly for training and retraining where planned growth in spending for the year ahead is the highest in over two years, the CBI said.

This all suggests that while no move in UK monetary policy is likely near-term, a tightening of policy remains far more likely than a further loosening – and that should support the British Pound in the second half of the year.