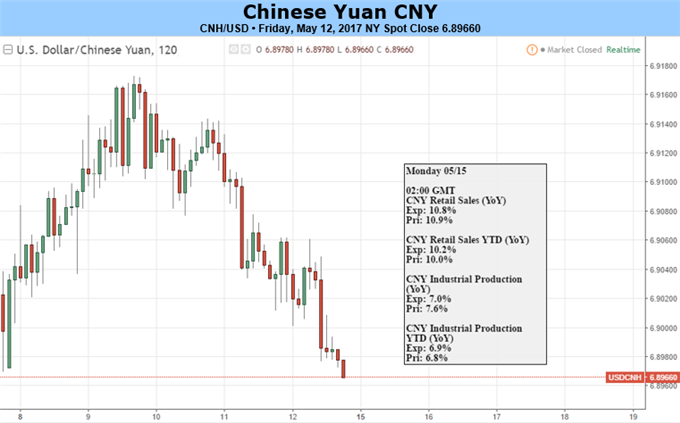 This week the USD/CNH continued to test 6.8980, the 61.8% retracement of the 2017 open range, but failed to break above the key level. In the coming week, the outlook of Fed raising interest rates will be a key focus for Dollar pairs including the Dollar/Yuan. At the same time, event risks from China could add volatility to the pair as well. The country will release April prints for retail sales, fixed asset investment and industrial production on Sunday. Also, China will host the ‘One-Belt, One-Road’ forum on May 14th and 15th. Leaders from 29 countries including the U.S. will attend this event.

As of Friday, the probability of a Fed rate hike in the June meeting has increased to 93%, according to the Federal Funds Futures market. This means that investors widely expect a 0.25% increase in the short-term benchmark rate next month. Yet, the more important question is how many times more that the Fed will increase the rates by the end of year. One more time is less likely to lead a bullish trend in the USD/CNH; while, the Yuan is also less likely to gain much support from home, as China’s economic growth is expected to slow down from the second quarter. In this scenario, the offshore Yuan pair may continue to consolidate in a range as what was seen over the past two months.

However, if the U.S.’s recovery turns out to be faster than expected with sustainable improvement seen in the labor market as well as rising inflation, the odds of a fourth rate hike this year could start to pick up. This could fuel bullish momentum into the Dollar and then send the USD/CNH higher from the level that it has failed to break above since March. The U.S. jobs report for May that is scheduled to be released on Thursday could give out some clues on the development of the labor market.

On the other hand, two types of Chinese gauges could help to evaluate the pace of China’s economic slowdown, which will largely impact Yuan’s weakness. Chinese manufacturers’ performance as well as investment in fixed assets are the main indicators. In terms of producers’ conditions, both the official and Caixin PMI show whipsaw moves over the past four months, indicating manufacturing firms still face major obstacles to overcome. In terms of the fixed assets investment, both the growth in total investment and the growth in private investment have shown improvement in the first three months. On Sunday, China will release the April prints for these growth rates, which are expected to drop according to Bloomberg’s forecasts. If this turns out to be the case, it means that companies, especially private-owned companies that used to be key drivers to the economy still hesitate to expand their business.

Last but not least, the tension between the U.S. and China in trade and investment may continue to ease next week, following a trade deal reached by the two countries on Friday. As a part of the deal, the U.S. will send a representative to attend China’s ‘One-Belt, One-Road’ summit, a two-day event. The ‘One-Belt, One-Road’ initiative is considered to be the modern Silk Road, which is designated to help China to establish a network with its counterparts through infrastructure projects.