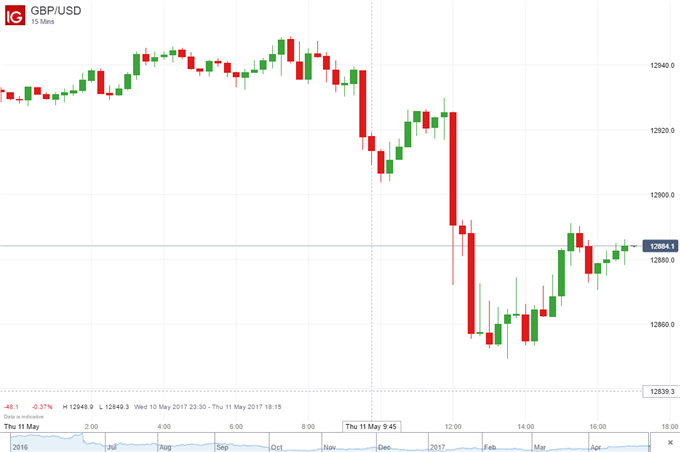 - BoE is assuming a ‘smooth Brexit’, which means plenty of Sterling volatility ahead.

Sterling has emerged relatively unscathed from a trio of assaults Thursday. First were the disappointing manufacturing and industrial production data for March that underlined a sharp economic slowdown at the start of this year.

The subsequent dip in GBPUSD hastened when the Bank of England left rates unchanged at its March policy meeting – as was expected – but downgraded its forecasts for UK GDP growth from 2% to 1.9% in 2017 and warned that falling real wages for British consumers will hold back the economy more than previously expected.

Rubbing salt in the wound was the latest NIESR GDP estimate for April, which fell sharply from 0.5% to 0.2%.

GBPUSD has dropped nearly half a per cent in today’s London session to trade at 1.2379, but the move doesn’t yet signal a full blown reversal of a bullish trend. It’s a similar story in EURGBP, which has gained over half a per cent but looks to be meeting resistance in the 0.8450 area.

Carney, meanwhile, said the bank’s forecasts hinge on a "smooth" transition to Brexit, and a big pick-up in wage growth, and suggested that UK interest rates may need to start to go up within the next couple of years, possibly around the time Britain leaves the EU in 2019.

The Bank, he said, assumes "the adjustment to the United Kingdom’s new relationship with the European Union is smooth, and that Bank Rate follows the market-implied path for interest rates".

The fact the BoE assumes a ‘smooth’ Brexit means Sterling traders can expect plenty of volatility as the UK begins two years of what are likely to be fraught Brexit talks with the EU. Carney said the BoE had not made forecasts based on the scenario of a ‘disorderly’ or ‘hard’ Brexit – so any signs that Britain could be hurtling out of the EU without adequate agreement on future relations in place will lead to turmoil in GBP crosses too. One such event would be Prime Minister Theresa May failing to secure a significant new majority after the June 8 general election.