Brexit Briefing: How to Trade the UK General Election

- The strength of the British Pound since a UK general election was called for June 8 looks sustainable as the election should bring more certainty about both Brexit and economic policy.

The surge in the British Pound since UK Prime Minister Theresa May called a general election to be held on June 8 is unlikely to be a one-day wonder. Indeed, the advance looks highly sustainable as an increased majority for May’s ruling Conservatives will strengthen her hand in the Brexit negotiations to come and allow her more freedom to act decisively on domestic policy.

The election, which was approved by the Westminster parliament today by 522 votes to 13, will likely result in a huge majority for May’s center-right party. A “seats market” just launched by IG forecasts a Conservative majority of 100, with the ruling party winning 375 seats compared with the opposition Labour Party on 175, the Liberal Democrats on 30 and the Scottish National Party on 50.

Such a result would make a hard Brexit, where the UK and the EU fail to reach an agreement, less likely as May would have a strong mandate to negotiate a deal without worrying about hardliners in her party rejecting it. That suggests further gains for the Pound in the coming weeks, rather than just a squeeze on traders who have taken short positions in the currency.

However, in the near term, that short squeeze will likely add to the Pound’s upward momentum. IG client sentiment data are currently sending out a bullish signal for the currency as traders are still net short by a large margin. Moreover, the GBP/USD daily chart is positive too; the pair having broken out from a triangle pattern in place since October last year. 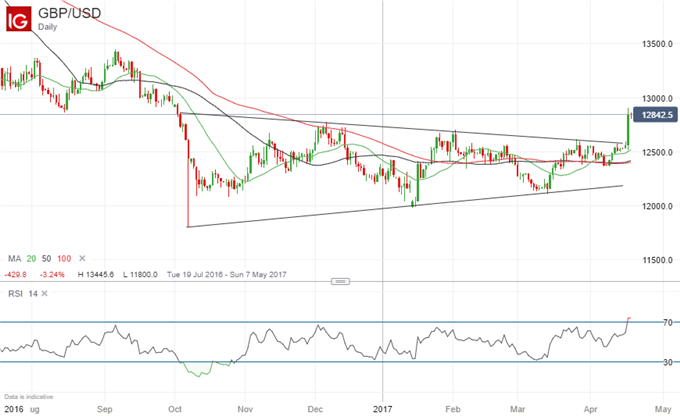 Indeed, the only warning signal on the chart above is the relative strength index (RSI), which suggests the pair is currently in “overbought” territory, although only just. A near-term target of 1.30 therefore looks eminently achievable, particularly as the CME Group FedWatch Tool is currently suggesting that the chances of a quarter-point increase in the Fed funds rate in June is down to42.3%. That in turn implies that the gap between US and UK 10-year bond yields could narrow from the present 115.6 basis points to the advantage of the Pound.

Meanwhile EUR/GBP has tumbled and is technically weak, with a move below 0.75 now looking possible long term. 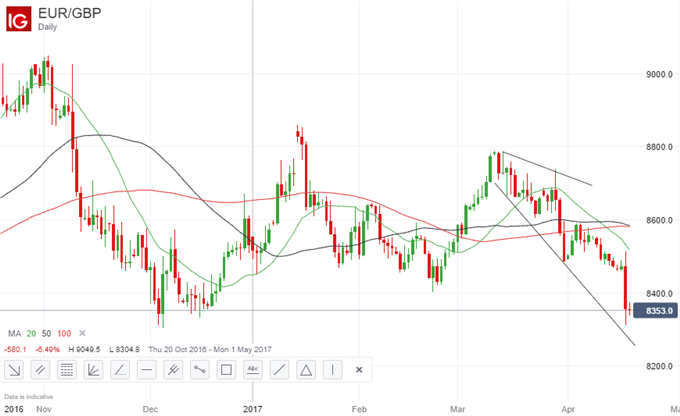 As for the London stock market, the FTSE 100 index of large-cap stocks has fallen as its inverse correlation with the Pound has remained in place. At the time of writing it is more than 300 points below last month’s record high at its lowest level since early February. That seems odd, as a Conservative victory would likely be good for stocks.

However, the index has been hit by the large number of internationally-focused companies included in it, and particularly by the number of miners and other commodity-based businesses that have suffered from weak prices, including the tumble in iron ore to a near six-month low.

By contrast, the FTSE 250 index of mid-cap stocks, which are generally more closely linked to the domestic UK economy, leapt to an all-time high Tuesday and that advance looks set to continue on hopes that a larger Conservative majority in June will lead to more business-friendly policies.