Brexit Briefing: Article 50 Could Be Triggered As Soon As Tomorrow

- If all goes to plan, the Brexit bill will pass through parliament today and receive Royal approval tomorrow.

- That would allow UK Prime Minister Theresa May to trigger Article 50 tomorrow if she decides to.

- A second Scottish independence referendum now seems likely, but not until Fall 2018 at the earliest.

The game of Brexit ping-pong between the UK’s elected House of Commons and the unelected House of Lords is almost over, meaning that Prime Minister Theresa May could trigger Article 50 of the Lisbon Treaty to begin divorce proceedings from the EU as soon as tomorrow, although her spokesman today emphasized that May’s self-imposed deadline remains the end of the month. The UK would become the first EU country to leave.

Yet the British Pound, which has been hard hit by Brexit uncertainty, actually gained ground Monday, suggesting it could rally once at least some of that uncertainty has been removed. Bearish bets against the Pound jumped as the start of the formal Brexit process approached, according to the latest CFTC Commitments of Traders Report, as the negotiations between the UK and the EU could be prolonged and difficult.However, Monday’s price action suggests that it could be set for a near-term boost as some of those betting against the UK currency cover their short positions. 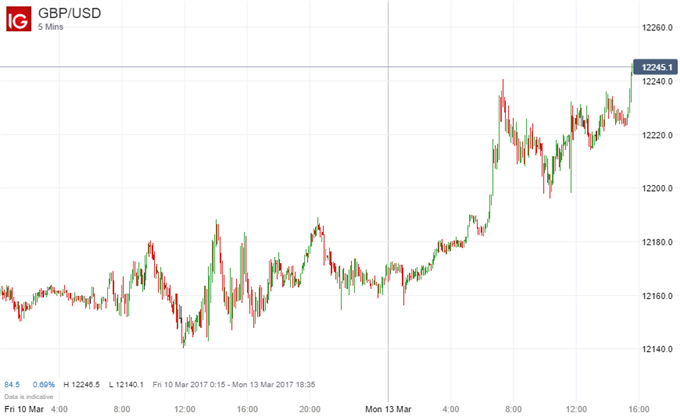 The Commons will likely reject two changes made to the Brexit bill by the Lords, who want to guarantee the rights of EU citizens in the UK and ensure parliament has a vote on any deal, when the lower house debates it for a second time later today. If it reverses the Lords’ changes, the bill will be passed back to the Lords to decide whether they want to amend the government’s plans again.The bill then moves from house to house until both sides agree – parliament could sit through the night to try to reach an agreement, and time has also been set aside on Tuesday and Wednesday.

Given that ultimately the Lords will not want to go against the will of the people expressed in the June referendum last year, they will likely back down, after which the bill will go to the Queen for formal approval and May can tell the rest of the EU officially that she is ready to start the two-year negotiation process.

The Pound’s rally Monday, against the Euro as well as the Dollar, also flew in the face of a statement by Scotland’s First Minister Nicola Sturgeon that she will seek authority for a new Scottish independence vote – largely because she made clear that it would not happen before Fall next year at the earliest and her political opponents rallied to oppose her.

Scotland voted against Brexit, which is why Sturgeon believes another independence referendum is needed before the negotiations end. However, opinion polls suggest the Scottish people will reject independence for a second time, which is why the Pound shrugged off the news and rallied.