Australians like to call their home “the Lucky Country” and maybe it really is.

It chalked up a record trade surplus of A$3.5 billion (US$2.6 billion) in December. What’s more it was the second one straight, coming after November’s $2.04 billion. A long chain of monthly deficits stretching all the way back to March 2014 has broken.

Of course, trade surpluses aren’t necessarily good, just as deficits aren’t necessarily bad. And there are a few clouds over this one. It is the fruit of a big surge in export profits, as Australia’s top two commodity earners – coal and iron ore – rose in price. Imports meanwhile have been far more sluggish, suggesting that Australia’s internal demand, and therefore its internal economy, could be doing better.

But these surpluses have come at a lucky time for Australia nonetheless. Financial markets were still reeling from early December’s news that the country’s GDP contracted in 2016’s third quarter. One contraction, anywhere, has investors scratching their heads and worrying about the prospect of another. And of course, “two consecutive contractions” has another, shorter, darker name: technical recession.

The Lucky Country doesn’t do recessions. It hasn’t had one for 25 years. That doesn’t quite mean 100 quarters of growth. There’ve been one-off contractions. But there haven’t been many. It’s an extraordinary record when you consider that the time frame in question includes the financial crisis years which sent many developed markets’ growth profiles back to the stone age.

So, these latest surpluses have come at a very handy time. They mean that net exports, at least, are likely to make a positive contribution to fourth-quarter growth, rather than weighing on it as they have recently.

It may not quite be time to get the Aussie flags out yet. Exports’ growth contribution is measured by volume, not value. And while export prices soared 12% in the fourth quarter (thanks to iron ore and coal), export volumes only rose 0.6%, according to official data. That means the boost they give to overall growth won’t be as dynamic as those “record surplus” headlines might lead you to believe. Still, it looks as though exports will help rather than hinder growth over 2016’s last three months.

That might be very lucky indeed because on the most recent evidence, the Australian consumer might not have much more to give.

The Australian Dollar has recovered well from the lows plumbed in aftermath of Donald Trump’s shock election back in November. If the specter of recession can be exorcised it might take back all those losses and then some. 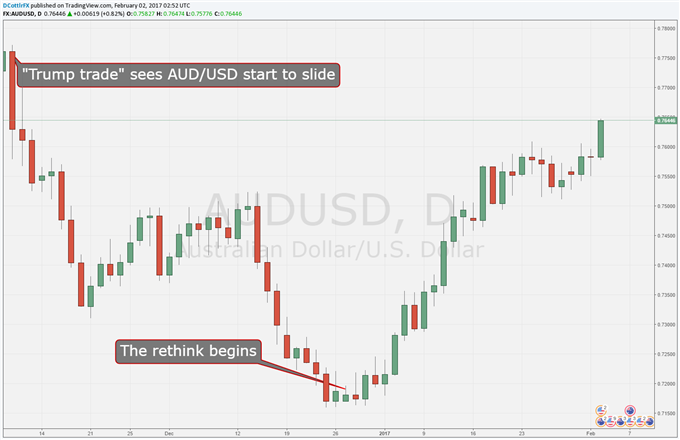 Always wanted to know more about trading? The DailyFX webinars are a great first stop.