- The UK Parliament is expected to vote in favor of triggering Article 50 after the European markets close Wednesday, beginning the formal process for the UK to leave the EU

The UK Parliament is expected to vote in favor of triggering Article 50 of the Lisbon Treaty after the markets in Europe close Wednesday. That would start the formal process of leaving the European Union and could prompt a drop in GBPUSD, but the pair is likely to rally later as the vote removes some of the uncertainty regarding Brexit.

Fundamentally, the UK economy is looking robust. Data released last week showed that strong consumer spending helped it grow faster than expected in the final quarter of last year, expanding by 0.6% in the October-to-December period – the same rate as in the previous two quarters, according to the Office for National Statistics. The figure indicates that the sharp economic slowdown predicted by the Remain camp following the Brexit referendum has not materialized, although in 2016 as a whole the economy grew by 2%, down from 2.2% in 2015.

Similarly, rising air fares and food prices helped to push up UK inflation to its highest rate since July 2014 in December. It rose to 1.6%, up from 1.2% in November, but remained below the official 2.0% target.

As for the future, the respected National Institute for Economic and Social Research said Wednesday that it now expects growth of 1.7% this year – only slightly down on the 2% recorded in 2016 and the second time NIESR has upgraded its growth forecast since its initial report two months after the June referendum predicted that growth would be just 1.0% in 2017.

Along with news Wednesday that the purchasing managers’ index for the UK manufacturing sector dipped to 55.9 in January from 56.1 the previous month but remained well above the 50 mark separating expansion from contraction, this all suggests that GBP is cheap from an economic perspective.

Parliament is widely expected to vote against various amendments to the bill, in favour of the bill itself and then in favour of the timetable for the bill. Further debate and more voting will follow but the whole process could be completed by March 1, allowing UK Prime Minister Theresa May totrigger Article 50at a European Council meeting in Brussels later that week, three weeks before her self-imposed deadline of March 31.

Parliament’s vote this evening could prompt a knee-jerk slide in GBP/USD but thereafter it is well placed to rally as the whole Brexit process becomes clearer and attention turns to the UK’s fundamental strength. 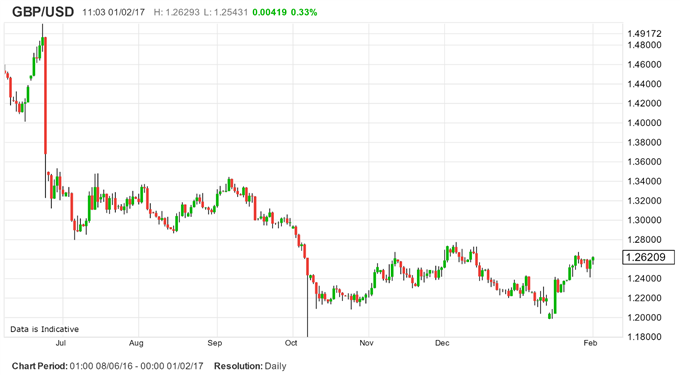 Meanwhile, the Brexit talks could be on a “humongous scale” involving “difficult trade-offs”, the UK's former EU ambassador Sir Ivan Rogers told a UK Parliamentary committee Wednesday. He predicted that much of the talks would be “conducted very publicly” with “name-calling” and an “extremely feisty atmosphere”.

Rogers added that EU Commission chiefs were saying the UK should pay €40-60billion to leave and that a trade deal could take until the mid-2020s to agree. However, in a possible sign of a softening of the EU’s attitude towards the UK, a leaked report from a European Parliament committee warned that the EU will lose out if there’s a bad Brexit deal.