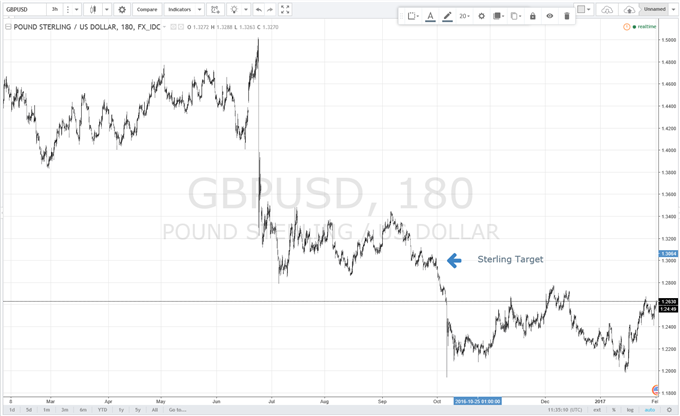 - Imported UK inflation will need to be watched closely by a central bank with little near-term monetary flexibility.

- Stronger Sterling could help the Bank of England steer the economy.

UK factory cost inflation hit a 25-year high, data showed Wednesday, a day ahead of the Bank of England’s policy meeting and quarterly Inflation Report. The latest Markit UK manufacturing PMI edged a touch lower to 55.9 in January compared with 56.1 in December but the input price balance jumped sharply to a record high of 88.3 from the prior month’s 77.7. The cost of raw materials has been fueled by a sharp drop in the value of the British Pound against both the US Dollar and the Euro, as well as higher oil and commodity prices.

The data point to UK inflation hitting 3% in 2017, a level that may cause BOE Governor Mark Carney to consider tightening monetary policy, or at least expressing his concerns to the financial markets. And Carney will also have to weigh up worries that higher UK prices may crimp consumer spending as households increasingly feel the squeeze on their purse strings. UK growth is expected to be dampened by upcoming Brexit talks, although recent data show that these worries have yet to hit the bottom line, with recently released preliminary 4Q UK GDP expanding at a robust 0.6% quarter/quarter.

The Bank of England will announce its latest monetary policy measures Thursday - all expected unchanged - before releasing its latest quarterly Inflation Report with the MPC likely to upgrade inflation and growth expectations.

While the central bank will have to be alert to any inflation overshoot, something the Governor says he will have limited tolerance for, a rebound in Sterling may help to dampen input price costs. GBPUSD dropped sharply in the wake of the UK decision to leave the EU, and despite edging off its lows the UK currency steadfastly refuses to price in the strong UK economic data released since June last year. UK growth in 2016 of 2% (preliminary) showed the UK economy growing at the fastest rate of all G7 countries, while services and manufacturing figures continue to defy fears of a Brexit slowdown. Any heightened official rhetoric on higher inflation expectations in the UK, and warnings from any MPC official, could see GBPUSD push quickly back to its December high of 1.2775 before the late October high, and big figure change, of 1.3000 hoves into view.