The Japanese Yen heads into 2017 falling fast against the US Dollar, and fundamental developments suggest the JPY may continue its decline versus the resurgent Greenback. Yet it was only two months ago the USD/JPY exchange rate languished near multi-year lows and the opposite was true. A shock result in the US Presidential election set off a dramatic rally in global bond yields and equities—sparking the largest five-week USD/JPY rally (Japanese Yen decline) in modern history.

The impressive turnaround in market sentiment acts as clear reminder that fundamental currents can shift in an instant. We head into the New Year with a clear JPY-bearish trading outlook for two key reasons. Yet it will be critical to watch these same factors given that market sentiment can and have changed quite dramatically.

Reason 1 to Sell Yen: Bank of Japan Guarantees it will Remain Low-Yielder

An aggressive promise from the Bank of Japan guarantees that Japanese Government Bond (JGB) yields will remain low as BoJ Governor Kuroda threatened unlimited purchases of JGB’s to keep the 10-year yield near zero percent. By comparison the US 10-year Treasury Note yield hit as high as 2.62 percent a month following the US Presidential election. Selling the JPY-denominated bond at 0.0 percent could theoretically offer 2.6+ percentage points of guaranteed yield via its USD-denominated counterpart, and the fast-growing yield differential helps explain why the USD/JPY moved dramatically higher into the year-end.

Yet no trade or policy is without risk: the USD/JPY interest rate differential remains attractive only if yields remain stable and exchange rate volatility is low. The BoJ’s threat of unlimited buying is certainly credible—it could hypothetically print limitless JPY in order to fund its purchases. Of course such a policy could quite quickly have a destabilizing effect as a surge in the money supply could send domestic inflation sharply higher and likewise force depreciation in the Yen. If the Bank of Japan subsequently breaks its promise on yields we would almost certainly see pronounced volatility in both JGB markets and the JPY. Traders should keep these risks in mind before chasing the USD/JPY higher on yields alone.

If we assume the Bank of Japan keeps its promise, the JPY-short trade remains attractive in a stable market environment. Which brings us to our next key theme—buoyant global markets encourage risk-taking and could fuel further Yen weakness.

The late-year surge in global equity markets has encouraged risk-seeking behavior, and the Japanese Yen remains likely to depreciate further as speculators chase higher returns in other major global currencies. The wave of economic optimism surrounding the US economy following its Presidential Elections likewise suggests markets will remain buoyant through the foreseeable future. What could change?

Put simply: market sentiment can change in an instant, and there are foreseeable and unforeseeable risks to the sudden resurgence in global financial market risk-taking. Chief among them is perhaps the sudden surge in global populism and trade protectionism which threatens to cut into global trade. In this regard Japan itself is particularly at risk—it perennially runs a large Current Account surplus and its economy depends on global consumers to drive growth.

If global populism sparks a trade war, Japan’s economy could take a big hit and financial market volatility would be all but guaranteed. One might argue that a sharp drop in trade would hurt the Japanese Yen and in turn send the USD/JPY higher—benefiting those who have speculated on further JPY weakness. Yet previous episodes of Japanese financial market instability have in fact produced the opposite effect as domestic investors turn risk-averse and rapidly repatriate funds into JPY. This effect remains a clear risk for those who seek to sell the Yen versus the US Dollar and other major counterparts.

We will keep a close eye on global financial market risk appetite—particularly as key economic risks loom large. Absent a material shift in market sentiment, however, the Japanese Yen remains likely to trade lower into the New Year. - DR 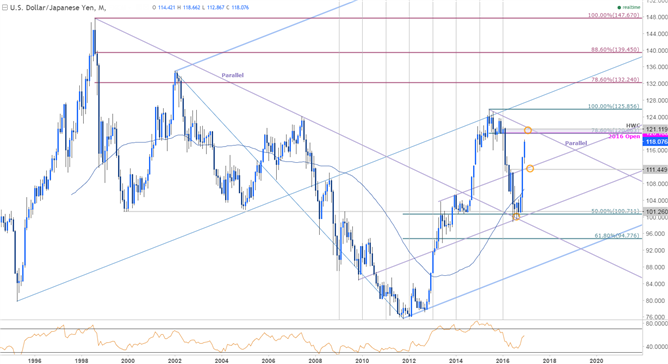 USDJPY responded to a critical support confluence in the second half of the year around the 101-handle (100.71-101.26) – this region is defined by the 50% retracement of the 2011 rally, the 1999/2000 lows, former trendline resistance extending off the 1998 & 2007 highs and a median-line extending off the 2009 lows. The exchange rate could not register a weekly close below this mark and as of 12/20 the subsequent rally has marked the largest quarterly advance since Q3 1995 and the largest quarterly range (ATR) since Q4 of 2008. If this was just a zoom & retest of the 2014 breakout, the broader outlook would remain constructive while above this key threshold heading into 2017. Note that a parallel extending off the 2013 highs converges on the June high and highlights possible near-term support at 111.45. 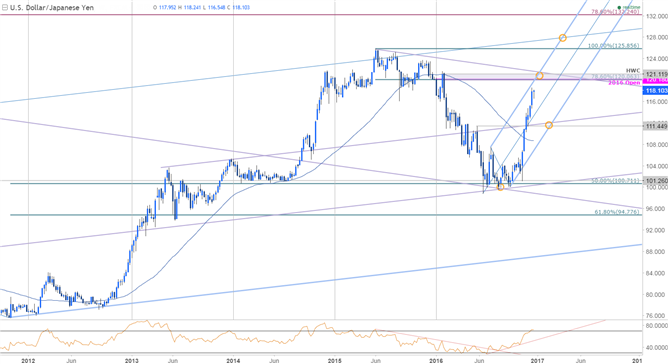 The focus heading into Q1 is on a key resistance confluence at 120.18-121.12 where the 2016 open converges on the yearly high-week close, the 78.6% retracement of the 2015 decline, the upper median-line parallel of the embedded ascending structure and basic trendline resistance off the 2015 high. The current rally is at risk heading into this region and we’ll be looking for a pullback to offer favorable long-entries while above confluence support at 111.45. 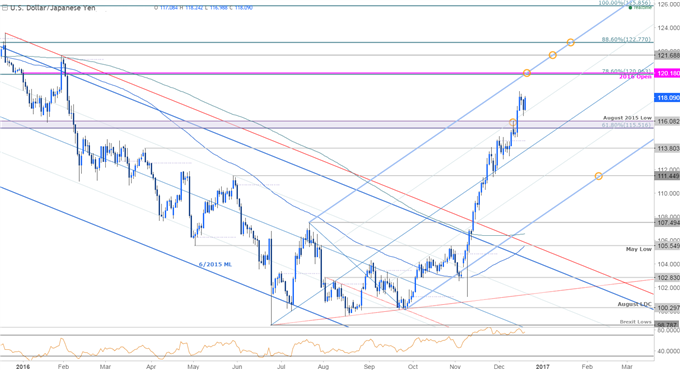 Divergence in near-term price action further highlights the risk for a pullback heading into this key structural resistance barrier (doesn’t mean we can’t continue to rally for a few more weeks). Interim support rests at 115.52-116.08 backed by 113.80 & 111.45- areas of interest for possible exhaustion / long-entries. A breach above confluence resistance targets subsequent topside objectives at 121.69, 122.77 & the 2015 high at 125.85. Bottom line: while the immediate focus is higher, the long-bias is vulnerable heading into the start of the year / key resistance and we’ll be looking to fade weakness while within this structure off the yearly lows. A breakout of this formation would likely to see accelerated gains for the pair towards previous yearly highs and the broader median-line formation extending off the 1995 lows (~127-128).

DailyFX Market OpinionsAny opinions, news, research, analyses, prices, or other information contained in this report is provided as general market commentary, and does not constitute investment advice. DailyFX will not accept liability for any loss or damage, including without limitation to, any loss of profit, which may arise directly or indirectly from use of or reliance on such information.

Accuracy of InformationThe content in this report is subject to change at any time without notice, and is provided for the sole purpose of assisting traders to make independent investment decisions. DailyFX has taken reasonable measures to ensure the accuracy of the information in the report, however, does not guarantee its accuracy, and will not accept liability for any loss or damage which may arise directly or indirectly from the content or your inability to access the website, for any delay in or failure of the transmission or the receipt of any instruction or notifications sent through this website.

High Risk InvestmentTrading foreign exchange on margin carries a high level of risk, and may not be suitable for all investors. The high degree of leverage can work against you as well as for you. Before deciding to trade foreign exchange you should carefully consider your investment objectives, level of experience, and risk appetite. The possibility exists that you could sustain losses in excess of your initial investment. You should be aware of all the risks associated with foreign exchange trading, and seek advice from an independent financial advisor if you have any doubts.