Rising U.S. interest rate expectations may continue to drag on gold prices as the Federal Reserve appears to be on course to further normalize monetary policy in 2017, but Chair Janet Yellen and Co. may largely endorse a wait-and-see approach over the coming months as the central bank ‘assess realized and expected economic conditions relative to its objectives of maximum employment and 2 percent inflation.’

After raising the benchmark interest rate in December, the upcoming rotation within the Federal Open Market Committee (FOMC) may push the central bank to retain the current policy at the next meeting in February as Chicago Fed President Charles Evans, Philadelphia Fed President Patrick Harker, Dallas Fed President Robert Kaplan and Minneapolis Fed President Neel Kashkari are slate to vote in 2017.

Looking at Fed Funds Futures, market participants largely anticipate the Fed to retain the status quo throughout the first-half of the year as the central bank warns ‘market-based measures of inflation compensation have moved up considerably but still are low; most survey-based measures of longer-term inflation expectations are little changed, on balance, in recent months.’ With that said, the FOMC meetings scheduled for the first-half of 2017 may tame the resilience in the greenback and help cushion the rapid decline in gold price, but the outlook for monetary policy continues to cast a long-term bearish forecast for bullion especially as Fed officials see three rate-hikes in the year ahead. 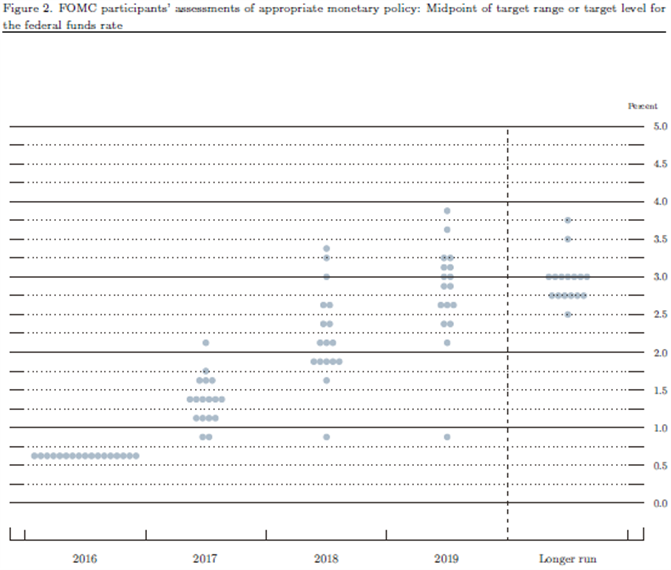 With the longer-run interest rate dot-plot still projecting a terminal rate around 2.75% to 3.00%, Fed Funds Futures are currently pricing an 80% probability for a move in June 2017, with additional rate-hikes anticipated to come in the second-half of 2017. Expectations for higher U.S. interest rates should continue to weigh on gold prices, but the weakness may subside over the coming months as the FOMC is anticipated to keep the benchmark interest rate on hold throughout the first-half of the year. 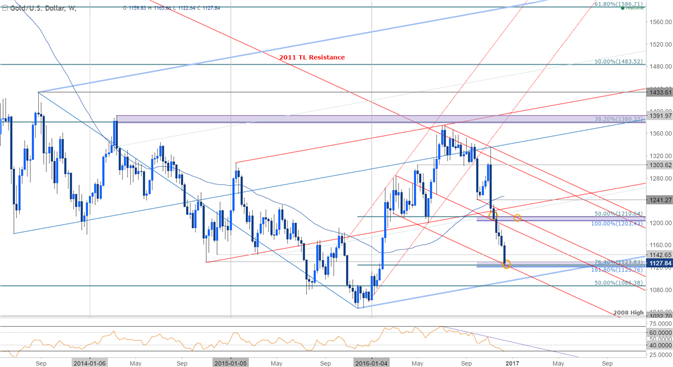 Last quarter we highlighted the risk for a break of the ascending channel formation off the lows after prices responded to key slope resistance extending off the 2015 high. Indeed the first week of October trade witnessed a break of channel support with the subsequent decline marking the largest quarterly loss since Q2 of 2013. Note that as of December 16th, prices marked the 6th consecutive weekly decline and if things remain on pace, the third consecutive monthly decline- both development that have historically seen significant upside in prices in the coming weeks before resumption of the broader trend.

Gold prices approached a critical support confluence in late-December at 1220/30- a level defined by the 161.8% extension of the decline off the yearly highs, the 76.4% retracement of the advance off the 2015 low, the 2014 low and the lower parallel of the embedded descending parallel formation. Note that the lower-median-line parallel extending off the 2015 low comes in just below and the immediate downside bias is at risk into this key region. 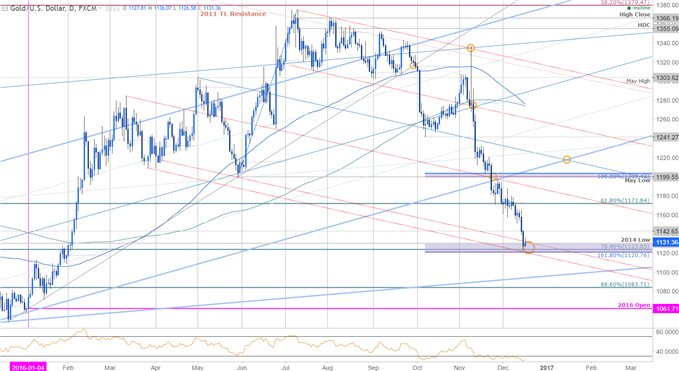 A closer look at price action further highlights this key support confluence and heading into the open of 2017 trade we’ll be looking for a low to mark a more significant recovery in price within the context of the broader downtrend. Look for interim resistance at 1171 backed by 1200/03. A breach above the highlighted median-line confluence around ~1220 would be needed to shift the broader focus back to the long-side in bullion.

Bottom line: heading into next quarter we’ll be looking for a relief rally to offer more favorable short-entries with a break lower risks substantial losses for gold. Such a scenario eyes subsequent support targets at the low-week close / 88.6% retracement at 1083/85 backed by the 2016 open at 1062 & the 2016 low at 1046.