The Japanese Yen heads into the end of 2016 trading near multi-year highs versus the US Dollar, and economic developments suggest the JPY may finally break the ¥100 level before the year is through. Continued inaction from both the Bank of Japan and the US Federal Reserve represents the biggest risk to the USD/JPY exchange rate. Other key risks are the rise of trade protectionism and financial market volatility. And indeed, the status quo suggests the USD/JPY will likely fall further until we see major changes.

It was supposed to be the year of “the great divergence” in monetary policy as the US Federal Reserve would raise interest rates while the Bank of Japan and other global counterparts went in the opposite direction. Suffice it to say the Fed did not hold up its end of the bargain—it hiked rates once at the end of 2015 but failed to match market expectations for further moves through 2016. This fact helps explain why the US Dollar posted its worst nine-month performance versus the JPY since the Global Financial Crisis. And indeed, comparable disappointments from the Bank of Japan put further downward pressure on the yield-sensitive USD/JPY exchange rate.

The Bank of Japan started the year in fairly dramatic fashion as it cut its benchmark interest rate into negative territory, but the BoJ went on to disappoint those looking for further monetary policy easing through the rest of the year. This fact is especially surprising given that National Japanese Consumer Price Index inflation figures showed the country re-entered deflation through the first quarter. It was almost humorous to note the Bank of Japan forecasted inflation would hit 1.7 percent in 2017 while the median private forecast pointed to 0.9 percent growth. Officials finally posted a dramatic cut in inflation and growth forecasts at their July meeting, and further policy easing seemed inevitable.

Yet the BoJ would not meet market expectations for a straightforward reason: negative interest rates were producing unwanted side effects and aggressive QQE policy left the bank with little scope for further asset purchases. Kuroda eventually introduced two modest policy changes at the bank’s September meeting—the BoJ would raise its inflation target above 2.0 percent and put a ceiling on 10-year Japanese Government Bond yields. The first seems unlikely to have any real difference on market expectations given that the BoJ has thus far proven unable to achieve its existing inflation target. The second was a bit more ambiguous as the BoJ theoretically committed to unlimited QQE purchases if yields approached the stated ceiling. JGB yields are nonetheless below the official ceiling and the statement effectively calls for unchanged policy through the foreseeable future. We thus enter the final quarter of 2016 with the status quo firmly intact, and this favors a continuation of USD/JPY declines.

Politics to the Fore Ahead of United States’ Presidential Elections

One typical risk to betting on the Yen (betting against USD/JPY) is Ministry of Finance intervention, and that seems an especially big risk as the USD/JPY approaches ¥100 .Yet obvious international political pressure may limit the MoF’s ability to make a substantive difference in the currency’s trend.

Japan stands to gain if the United States’ Congress and President approve the much-heralded Trans-Pacific Partnership (TPP) trade agreement. Anti-trade sentiment has nonetheless come to the fore ahead of the US Presidential Elections in November, and ratification of the TPP is far from certain. Aggressive currency manipulation from the Japanese Government could further raise the ire of the US politicians and effectively kill the TPP in its tracks. The Japanese MoF has certainly warned it could intervene if the Yen continues to strengthen, but these political calculations make those threats considerably less credible. Failure to act would clear the USD/JPY to break and stay below ¥100.

Will Markets Cooperate with the Japanese Yen?

The final wildcard for the Yen is not limited to Japan but especially relevant for its currency: will global financial markets remain stable? The near-term correlation between the USD/JPY exchange rate and the US S&P 500 Volatility Index (VIX)—also known as the “fear index”—recently hit its strongest in two years. The correlation has admittedly been volatile, and the USD/JPY shows little link to the VIX when the VIX is low. The fact the JPY surges (USD/JPY declines) when the VIX spikes higher helps to highlight the fact the Yen tends to strengthen in times of financial market turmoil. The recent jump in S&P volatility coincided with Yen strength, and any similar episodes of sharp S&P declines would also likely coincide with JPY gains. 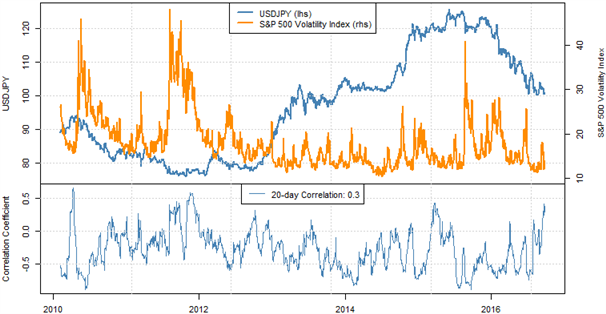 It is important to note that the reverse is not necessarily true; quiet markets may not produce USD/JPY strength. Thus it seems volatility is a uniquely lopsided risk for the Yen.

The combination of volatility risk and other fundamental factors leave us bullish the Yen (bearish USD/JPY) through the foreseeable future. Our technical picture highlights the risks below. - DR

Technical Analysis: It’s All About 100

Looking at the USD/JPY weekly chart, the sharp decline this year might still be considered corrective from a strictly technical perspective, with the 50% Fib from the October 2011 low to the June 2015 high coming around the 100.711 level. 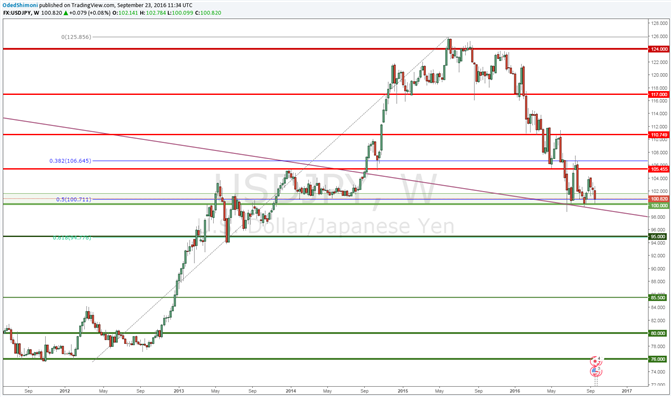 This means that the quarterly technical outlook continues to hinge on the pair’s reaction to the key support area around the 100 figure, which has a fundamental and technical importance as a key psychological hurdle.

Indeed, despite several attempts, the pair failed to print a weekly close below the 100 level for the past several months, but pressure seems to be building, and a breakdown seems likely to shift focus for the 95 handle which coincides with the 61.8 Fib. 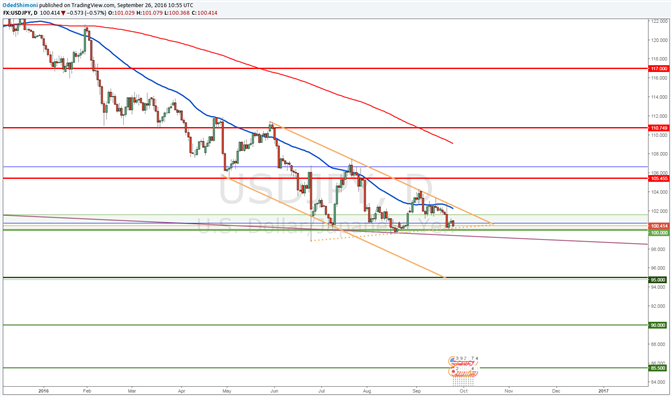 Looking at the pair from a daily perspective, we can see that since the “death cross” of the 50-day simple moving average below the 200 average, the USD/JPY has been in a clear down trend, well below the 200 SMA, and every attempt above the 50 SMA was quickly rejected. In turn, this implies that at the moment there are no significant bullish signs at the shorter term outlook.

For bulls to start making a case for higher prices, the pair may need to break, and hold above its 50 day SMA, which also coincides with a descending trend line at this point in time. This might expose resistance around 105.455 followed by 110.750.

If bears manage to crack the 100 level, and hold price below, they might hit an air pocket (intervention risks aside) until the 95 level, with the 90 level in focus immediately after.