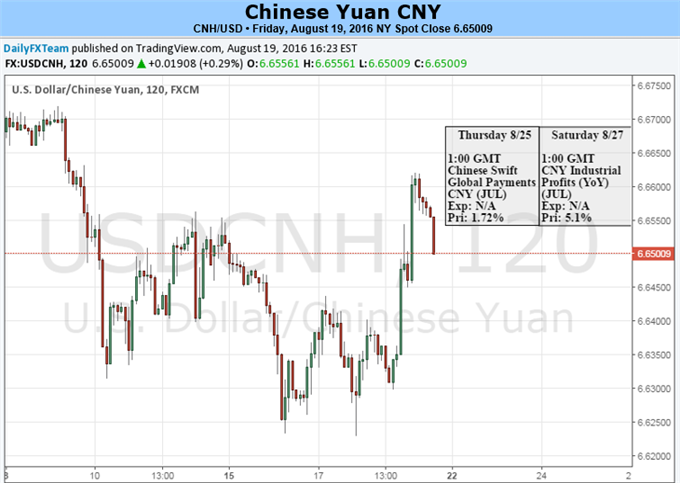 Yuan Continues to Consolidate Ahead of G-20

This is the third week that the offshore Yuan (USD/CNH) held a tight range between 6.6220 and 6.6700; the onshore Yuan (USD/CNY) was in an even tighter range between 6.6220 and 6.6550. At the same time, the PBOC set the Yuan’s daily reference rate to the highest level since the Brexit referendum, to 6.6056 on Wednesday; however, both onshore and offshore Yuan rates moved roughly 300 pips away from this level. On Friday, big spreads between the daily fix and both Yuan rates were seen once again: the PBOC set the fix stronger to 6.6211 on the day, but following the release, both Yuan rates weakened against the US Dollar. As of 10:40 am EDT, the offshore Yuan is 366 pips weaker than the fix and the onshore Yuan is 299 pips lower than the fix. A large gap between onshore and offshore Yuan rates was not uncommon but big gaps between both Yuan rates and the Yuan fix is rare. This may hint at wrestling between the Central Bank’s guidance and market moves.

In the coming week, this wrestling may continue as a primary theme amid a light Chinese calendar. Major event risk will likely come from trading counterparts, including measures for US labor and housing markets for the month of July. Fed Chair Yellen’s speech may bring some volatility to FX markets but is less likely to change the fact that FOMC members are holding divergent views towards imminent rate hikes. The odds of a hike in September is at 24% and 28.9% in November, so relatively low. As our Currency Analyst James Stanley discussed,the marginal utility of rate hike fears is diminishing. Without a high probability of a Fed rate hike, the Dollar/Yuan is less likely to break the pivotal 6.7000-psychological level.

As the G-20 Leaders meeting in China will start in two weeks, the PBOC may have increasing incentive to hold Yuan rates stable. The September G-20 Leaders meeting has been considered to be the one of the most important events for China in 2016. The preparation work. As well as other related news items have been in the Chinese headlines since the beginning of this year. Three weeks before the opening of the top meeting, Hangzhou, where the meeting will be hosted, and its neighbor cities including Shanghai have all increased security in public transportation systems, showing that the country has started to make the final preparation for the get-together. Ahead of G20 Ministers and Central Bank Governors meetings on February 26th and July 23rd, Yuan rates saw steady moves. We may see similar moves in Yuan rates over the following periods till the end of the G20 meeting.

This does not mean Yuan rates will follow the PBOC’s guidance all the time. We have already seen discrepancy between Yuan rates and the Yuan fix over the past week, especially a significant gap between the onshore Yuan rate and the fix. The Yuan’s fix tested 6.6056 on Wednesday. It appears as if both onshore and offshore Yuan rates were not ready for this level; both rates found support around 6.6240. In the coming sessions, Yuan rates will more likely to continue to consolidate in a range.