- FX volatility is set to remain high with Brexit vote tomorrow - it's the right time to review risk management principles to protect your capital.

This is the most recent update in our look at retail crowd positioning ahead of the UK-EU referendum on Thursday, June 23. Learn more about SSI and its relationship with price and Brexit developments in our first update, “Retail Crowd Flips Positioning in GBP/USD on Approach to Brexit Vote.” 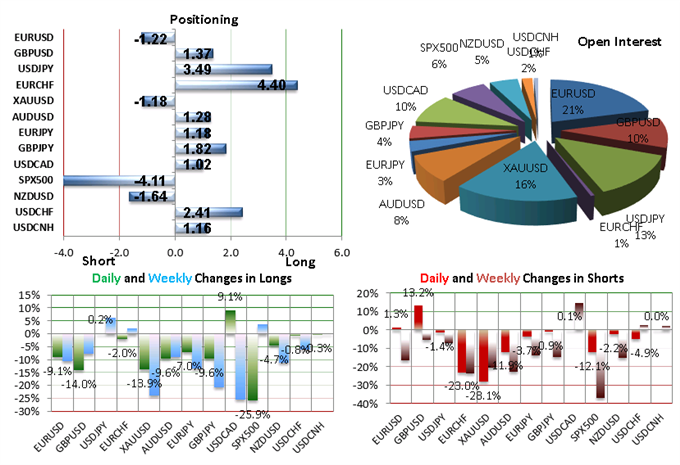 With the UK-EU referendum on the horizon, there are two pairs that are of obvious interest to us over the next 48-hours: GBP/USD and GBP/JPY. The reason is fairly obvious – tomorrow’s UK-EU referendum vote, cherishingly known as the Brexit vote. With 1-week annualized volatility pricing in a +/- 3.9% move around the results, there’s a high degree of necessity to actively manage risk if you’re going to be engaged in markets through Friday’s close.

Likewise, applying some common market knowledge that it’s not good to be in a crowded trade, we’re inclined to watch what the retail crowd is doing, particularly when the retail crowd (for lack of better phrasing) crowds into a position.

With that said, for some time now, the retail crowd has been reliably on the wrong side of the downtrend in the British Pound, particularly throughout the end of 2015 and early-2016. Ahead of tomorrow’s Brexit vote, and after the latest YouGov poll showed the ‘Remain’ side ahead at 51% to 49% for ‘Leave,’ the retail crowd remains net-short GBP/USD, which they have since the start of the week when GBP/USD initially jumped through $1.4500. 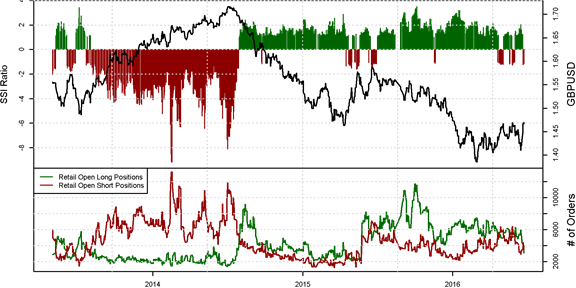 We use our SSI as a contrarian indicator to price action, and the fact that the majority of traders are short gives signal that the GBPUSD may continue higher. The trading crowd has grown less net-short from yesterday but unchanged since last week. 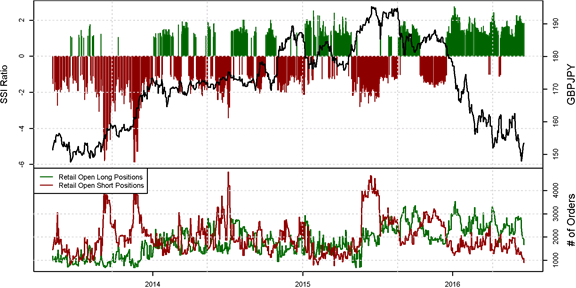 The trading crowd has grown further net-long from yesterday but moderated since last week. In context of the dramatic decline in open interest, this is not a reliable signal. A tenet of technical analysis is that strong trends are supported by increasing participation. Falling open interest in GBP/JPY suggests that participation is doing just the opposite. The combination of current sentiment and recent changes gives a further mixed trading bias.

FX volatility is set to remain high with Brexit vote tomorrow - it's the right time to review risk management principles to protect your capital.