- Crowd has been historically wrong on GBP/JPY and GBP/USD in recent months.

- FX volatility set to remain high with Brexit vote next week - it's the right time to review risk management principles to protect your capital.

Why Do We Look at Positioning?

The firm makes its retail trader positioning data available to help fill this important gap in market information. We call it the Speculative Sentiment Index (SSI) because it’s exactly that: a measure of bullish/bearish emotion. To do so, we do not take trade size into account and simply compare total open long positions to short positions.

Why do we do this? After having compiled execution data for over 43 million live trades between March 1, 2014 and March 31, 2015, we’ve learned two key tenets: 1) the retail crowd is barely more often right than wrong; and 2) the retail crowd loses significantly more it gains per average trade. For example, we see that EUR/USD trades were closed out at a profit of 61%, but the average losing trade was worth -83 pips while the average winner was only +48 pips. Traders were correct more than half the time, but they lost over 70% more on their losing trades as they won on winning trades.

The track record for the volatile GBP/USD pair was even worse. Traders captured profits on 59% of all GBP/USD trades. Yet they overall lost money as they turned an average +43 pip profit on each winner and lost -83 pips on losing trades.

If we go against what the majority of traders are doing, we might expect to lose more often than we gain. Remember that past performance is not indicative of future results, but our experience shows that this may have nonetheless been a winning strategy. Characteristically, the retail crowd is analogous to commercial hedgers in the futures market: shortest at the tops and longest at the bottoms; and wrong for the meat of the move. How do we interpret the SSI? Visit the DailyFX Sentiment page and get the SSI trading guide.

There are two pairs of interest to us over the next few days in particular: GBP/JPY and GBP/USD. The reason is fairly obvious – the upcoming June 23 UK-EU referendum vote. For some time now, the retail crowd has been reliably on the wrong side of the downtrend in the British Pound, particularly throughout the end of 2015 and early-2016. Over the past few days, there have been significant shifts that suggest an increasing probability of a ‘remain’ vote emerging. 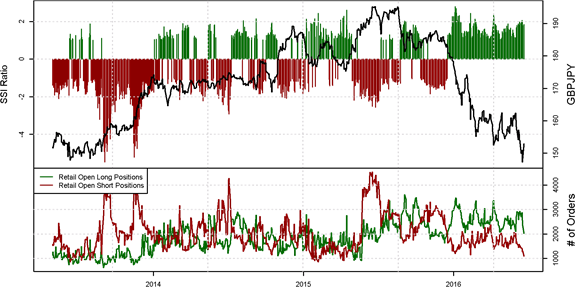 We use our SSI as a contrarian indicator to price action, and the fact that the majority of traders are long gives signal that the GBP/JPY may continue lower. Falling open interest reduces confidence in the bullish positioning signal here (a tenet of technical analysis). In context of the the trading crowd dramatically trimming their exposure over the past week, it seems the crowd is starting to take their Brexit bets off the table. A closer look at GBP/USD is worthwhile. 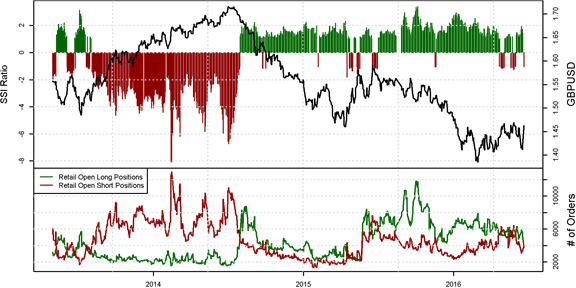 As mentioned earlier, we use our SSI as a contrarian indicator to price action, and the fact that the majority of traders are short gives signal that the GBP/USD may continue higher. The trading crowd has flipped from net-long to net-short from Friday and last week. The combination of current sentiment and recent changes gives a further bullish trading bias.

Let’s tie this all together. Our study of execution desk data shows that going against the trading crowd could make us lose on our trades more often than not. But a closer look also shows that crowds can go really wrong when they’re wrong. Our aim is to use retail FX trader sentiment to potentially catch and time major market swings. In this case we see that the majority of trades were long the British Pound versus the US Dollar from most of the second half of last year and the first four months of this year. This is typical: the crowd holds onto its losers longer than its winners – “loss aversion” in its clearest form.

Theoretically, a trader could have gained by doing the opposite of what the ‘trading crowd’ was doing. These examples are very much the exception and not the rule. True, we’re aware that the majority of contrarian trades would have been closed out at losses, as the retail crowd is right more often than wrong. But due to poor risk management – whereby the trading crowd allows its losers to dwarf its winners - our aim is to use retail FX trader sentiment to potentially catch and time major market swings—taking a contrarian view of crowd positions all the while.

If there’s a move around Brexit, the best bet may be to do the opposite of the retail crowd in the wake of the results – especially if it’s a big move, the crowd will miss most of the move. The fact that the crowd is reducing exposure in GBP/JPY and is now net-short GBP/USD gives greater confidence for a move higher in GBP-crosses, which in turn would translate into a ‘remain’ vote resulting from Thursday’s UK-EU referendum vote.