The markets are holding their collective breath. This is just the Pound traders, nor is it just the FX crowd that is on high alert. The impending EU Referendum vote in the UK is casting a long shadow over the entire financial system. The fear of fallout following a disorderly outcome arises as much from the unstable conditions fostered by the reach for risk and the moral hazard in monetary policy as it does the direct economic and financial implications of a split in one of the world’s collective economies.

For those not yet caught up to speed, the EU Referendum – colloquially referred to as the ‘Brexit’ – vote is a national ballot to determine whether the United Kingdom will remain member of the European Union or strike out on its own. This is not an immediately binding legal decision but rather a ‘will of the people’ evaluation that will lead to negotiations. Nevertheless, the market is very likely to treat it as if it were to flip the switch. The polls are scheduled to open at 7:00 AM local time on Thursday, June 23rd. They will close at 10:00 PM and the count will officially begin from there. It can take an indeterminable time to tally the vote to find a statistical majority, but it is expected sometime midday Asia Session Friday.

Market Conditions Past and Present

The circumstances that we are seeing in the market today are unprecedented. However, there is some precedence we can draw from two recent historical events that carry similar fundamental influence and market anticipation: the Scottish Referendum and UK General Election. Expected volatility generated remarkable market activity (gaps, surges, abrupt reversals) leading up to the event. The tallies stoked dramatic volatility. And, activity that followed the events settled rather quickly with a distinct remanence of unease.

Following an agreement between the Scottish and United Kingdom governments, the Scottish Independence Referendum Act of 2013 was enacted and a vote was scheduled for September 18, 2014 to decide whether Scotland should be an independent country. The implications for the British Pound included the potential loss of a sizable chunk of the United Kingdom and the possible encouragement for additional referendums to arise looking to separate from the Kingdom. The GBP/USD activity heading into the event was volatile well before the actual vote. Transitioning from rate speculation surrounding BoE intentions to concern over economic stability, the market didn’t have a clear grip on the full range of risks that could arise from the event. 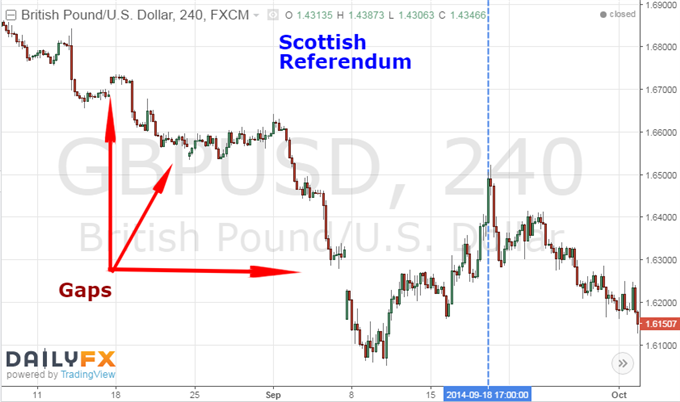 The event itself was perceived to be most dangerous to the stability of the Pound should the Referendum end with a ‘Yes’ vote that would split the collective economy. Recognizing the threat, the implied (expected) volatility behind the currency started to rise quickly. In the short-term implied volatility reading, a surge heading into the vote didn’t find comparable disquiet until we looked back over four-years. When the poll showed the ‘No’ camp won with 55.3% of the polls, fear quickly eased. 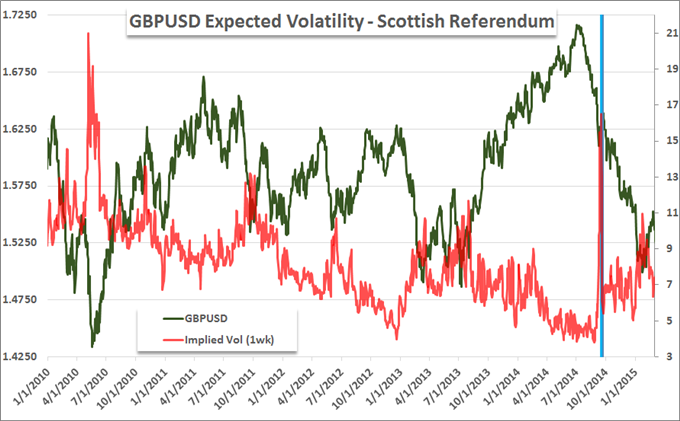 The next foreboding event to draw headlines and trader capriciousness was the UK General Election. The election of the 56th Parliament of the United Kingdom was set for May 7, 2015. Polls and political commentators suggested the vote could end with a tight margin and ultimately produce a hung parliament that would struggle to legislate. The implications for progress in growth and financial strength were palpable. Once again, the markets were volatile and prone to swing with the balance of the polls. 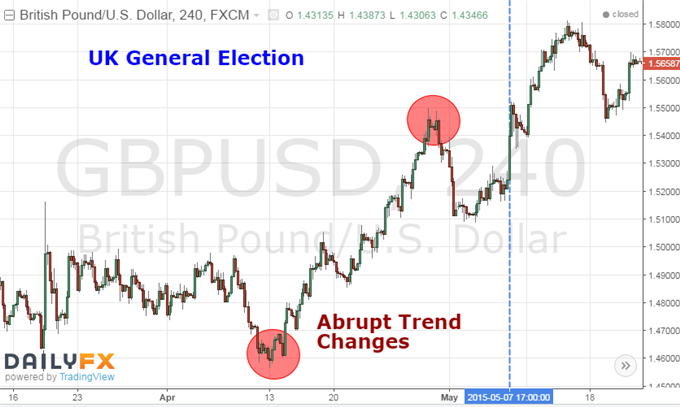 Once again, implied volatility heading into this election swelled as investors fretted the troubling economic implications of a hamstrung government. Already carrying over some of the elevated concern from the Scottish Referendum, the countdown to May 7th saw an even greater rise than the last vote. When the results of the vote showed a Conservative win that wouldn’t struggle to govern, the market responded with a strong Pound rally as fear lifted. 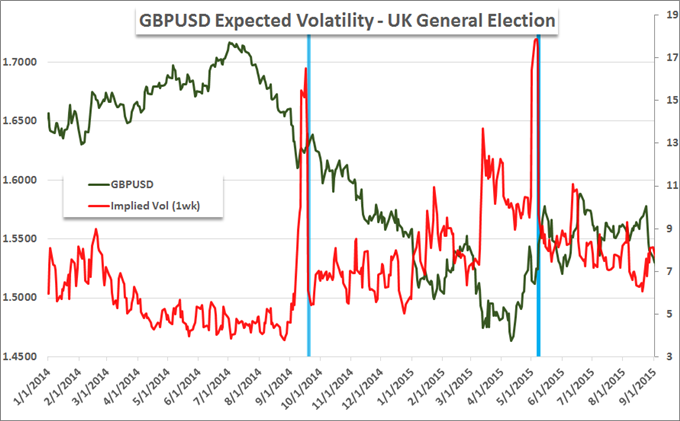 The third significant vote in the United Kingdom in less than two years, the Brexit is once again showing polls that suggest the economy is heading for trouble. Early polls through May initially found the ‘Remain’ camp maintaining a healthy majority which would keep the status quo that investors have adapted to. However, in the past few weeks, balance of opinion seemed to swing to the ‘Leave’ side. The implications of a new normal and unclear economic/financial situation churned serious volatility. In terms of GBP/USD price action this time around, the swings have been far more violent and unpredictable. 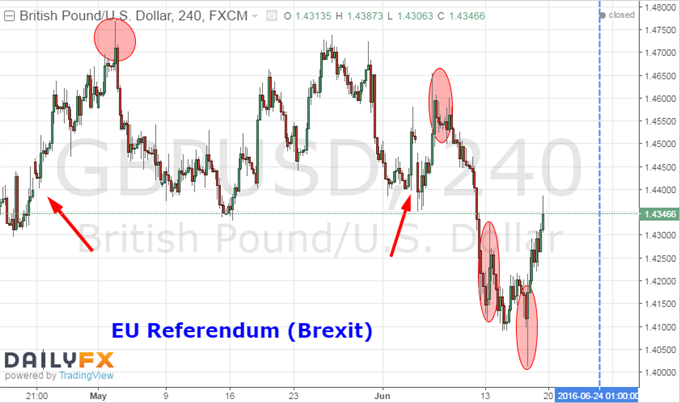 What is truly unnerving about this particular event is the scale of fear heading into it. The one-week implied volatility reading on GBP/USD has surged to staggering heights. Just short of 50vol, this is an extreme record – nearly twice the height of ‘fear’ through the Great Financial Crisis. Looking back at the two previous examples, they both ended with outcomes that would be considered stability-friendly. If the Brexit ends with a ‘Remain’ conclusion, the relief is likely to be significant given this risk premium. In the event of the alternative, we can’t even draw on the previous votes for guidance. The unknown and sheer anxiety can be extraordinarily disruptive.

In these circumstances, it is best to preserve capital rather than take a potentially disastrous assumption of a particular outcome. 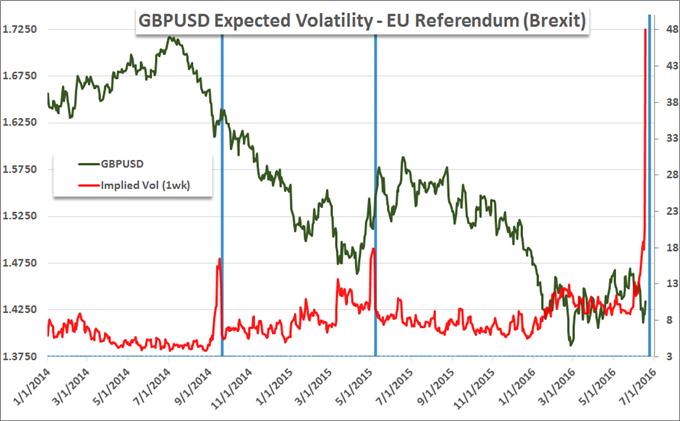